Extraordinary new views of Jupiter's poles provided by sensors on board NASA craft. 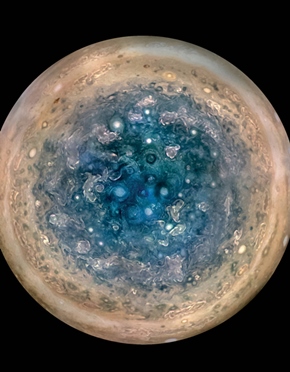 NASA’s Juno mission to Jupiter has returned a set of extraordinary images that shed new light on the giant gas planet – thanks in part to the optical, ultraviolet and infrared sensors on board the spacecraft.

Launched in August 2011, Juno arrived in the Jovian orbit almost exactly five years later, and has since flown to within 4200 km of the planet’s vast, swirling, atmosphere.

Data collected by JunoCam and other instruments, and now published in more than 40 different journal papers, was said to have thrown scientists – in baseball parlance – not just a “curveball”, but “knuckleballs and sliders”.

Rethinking Jupiter
“We knew, going in, that Jupiter would throw us some curves,” said Scott Bolton, Juno principal investigator from the Southwest Research Institute (SwRI) in San Antonio, in a NASA release. “There is so much going on here that we didn’t expect that we have had to take a step back and begin to rethink of this as a whole new Jupiter.”

The space agency says that the assumption-challenging findings are largely provided by the JunoCam imagery, which have provided close-up views of Jupiter’s poles for the very first time.

They show several enormous, swirling, storms – each larger than Earth – clustered together closely. “We're puzzled as to how they could be formed, how stable the configuration is, and why Jupiter’s north pole doesn't look like the south pole,” Bolton added.

Aside from JunoCam, the probe’s payload of instruments includes ultraviolet and infrared imagers and spectrometers, as well as a six-wavelength microwave radiometer for atmospheric sounding. Several non-optical pieces of equipment are able to monitor charged particles, gravity, and Jupiter’s huge magnetic field.

Based around CCD sensors provided by the US-headquartered company TrueSense Imaging (now ON Semiconductor), JunoCam is a visible-range camera with red, green and blue filters, plus a methane filter centered at 890 nm.

In an open-access overview paper published in the journal Science, the NASA science team and colleagues wrote: “The wealth of detail in these [JunoCam] images surpasses that of previous spacecraft because their trajectories were close to Jupiter’s equatorial plane, whereas Juno’s orbits were closer to the planet and oriented over the poles. Only Pioneer 11 had acquired non-oblique images over Jupiter’s north pole, but at ten times the distance of Juno.”

UV and IR spectrometers
While JunoCam has provided the most striking imagery, Juno’s UV and IR imaging tools have also captured brand new, high-resolution views and spectra of the planet’s northern and southern aurora, from directly above the respective poles.

“The IR aurora is thicker on the dusk side of the planet and thinner on the dawn side, as in UV,” reports the NASA science team, adding that it was possible to discern effects related to Galileian moons Ganymede and Io.

“Although many of the observations have terrestrial analogs, it appears that different processes are at work in exciting the aurora and in communicating the ionosphere-magnetosphere interaction,” they added.

Developed by the Italian National Institute for Astrophysics and funded by the Italian Space Agency, the Jovian Infrared Auroral Mapper (JIRAM) instrument captures aurora imagery at a wavelength of 3.4 µm – matching that of light emitted by excited hydrogen ions in the polar regions.

JIRAM is able to determine how water-containing clouds circulate below Jupiter’s surface, revealing the amount of water in the clouds. Spectra measuring methane, water, ammonia and phosphine absorptions indicate the chemical make-up of the atmosphere.

Juno’s Ultraviolet Imaging Spectrograph (UVS) is sensitive to both extreme and far-ultraviolet light, operating across a wavelength range of 68-210 nm. SwRI provided the instrument, with CSL/BELSPO in Belgium responsible for the scan mirror.

The good news for scientists is that they won’t have to wait long before the next set of intriguing results are collected: Juno’s orbit is scheduled to swing the craft close to Jupiter’s atmosphere every 53 days, and the next pass will see its instruments pointed at the famed “red spot”, on July 11.