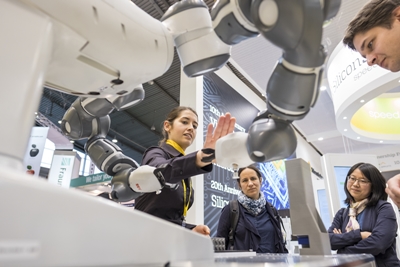 Cognex at the Vision show in Stuttgart

A series of acquisitions coupled with strong demand for its machine vision technology has propelled Massachusetts-headquartered Cognex to record sales and profits in 2016.

Topping half a billion dollars for the first time, the company’s sales revenues rose 16 per cent on the 2015 figure to reach $520.8 million – while annual net income surged to $149.8 million.

Company chairman Robert Shillman – who founded Cognex back in 1981 - said in response: “We reported the highest annual revenue, net income and earnings per share from continuing operations in our company’s 36-year history.”

Cash pile
Remarkably, Cognex was able to post the results in what it considered to be a “sluggish” year for spending in the industrial sector. Its CEO Robert Willett added: “While there’s uncertainty in the world today, we’re encouraged by the level of demand that we experienced in the second half of the year.”

The ongoing high profitability has seen Cognex’s balance sheet swell to nearly $750 million in cash and investments – plenty to finance any more acquisitions to build on the four that it completed during 2016.

Key to the rapid sales growth is the trend towards factory automation, which Cognex reports as a standalone business unit. Willett reported that divisional sales jumped 34 per cent year-on-year in the closing quarter of 2016, led by automotive, consumer electronics manufacturers and logistics companies in Europe and China.

Europe strong
Willett said that Europe had been particularly strong in the final three months of 2016, particularly as a result of spending by automotive firms, and added that the emerging 3D vision sub-sector was growing quickly.

“Our 3D products are gaining a lot of traction,” he told an investor conference call. “We grew well in excess of 100 per cent [in] that business last year." The CEO said that Cognex was still a small player in the 3D market, currently taking around a 10 per cent share of a market estimated at around $200 million now, but growing fast.

The Cognex CEO also explained that the Chiaro acquisition brings the company a complementary 3D sensor technology that is suited to applications requiring speed and a wide field of view but not micron-level accuracy. “These include applications such as measuring the dimensions and integrity of a box travelling on a high-speed conveyor in a warehouse,” he noted.

Looking to the future, Willett said that 2017 had so far got off to a better start than had been expected, with large orders from consumer electronics customers again expected to pull through during the middle of the year.

The CEO added that the roll-out of new displays technologies in particular should yield strong demand for machine vision products as production lines are brought up to speed for volume manufacturing.

“Korea is a great market for machine vision,” Willett noted, adding that Cognex was gaining strong traction in both the consumer electronics and automotive industries in the country. He also said that in India, where the traditional manufacturing sector is relatively unsophisticated and still relies on large numbers of laborers, investments by large domestic automotive and electronics producers should offer an opportunity in the longer term.

Barriers to entry
Asked about the possibility of new competitors looking to muscle in on what has become a highly profitable niche for Cognex, founder Shillman said:

“The barriers to entry in this business are substantial. The first barrier to entry is the incredible amount of technology that one needs to have. And it first starts with the knowledge of machine vision. I think at this point we probably have over 30 or 40 PhDs, guys who got their PhDs not just in computer science, but their thesis was specifically in machine vision.” 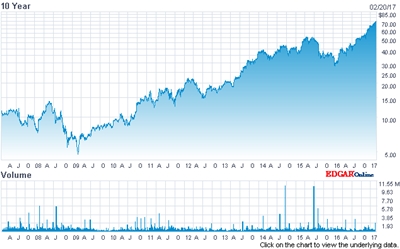 Willett pointed out that Cognex currently employs around 400 engineers, many of whom have worked at the company for a long time, and added that when other companies have previously tried to enter machine vision, they have tended to burn through a lot of cash before realizing how tough the technical challenges really is.

On top of that, Cognex has built up an extensive portfolio of intellectual property over the 26 years since Shillman started up the firm, further raising the barrier to entry.

Not surprisingly, all that has translated to a high market valuation of the firm that would make it an expensive acquisition.

Like many others in the optics and photonics space, Cognex’s stock price is currently trading at all-time highs, and after rising another 8.5 per cent following the latest results and outlook the firm commands a market capitalization of around $6.5 billion.