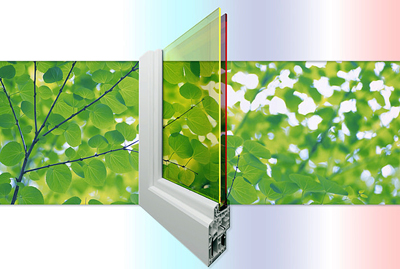 This approach has been made possible by a new window architecture, which utilizes two different layers of relatively low-cost quantum dots tuned to absorb different parts of the solar spectrum.

The work has just been published in Nature Photonics: “Tandem luminescent solar concentrators based on engineered quantum dots” by Kaifeng Wu, Hongbo Li, and Victor I. Klimov.

Lead researcher Victor Klimov commented, “Because of the measured strong performance we can achieve with low-cost, solution-processable materials, these quantum-dot-based double-pane windows and even more complex luminescent solar concentrators offer a new way to bring down the cost of solar electricity.

“Our approach complements existing photovoltaic technology by adding high-efficiency sunlight collectors to existing solar panels or integrating them as semitransparent windows into a building’s architecture.”

The key to this advance is what the LANL scientists call “solar-spectrum splitting,” which allows the separate processing of higher- and lower-energy solar photons. The higher-energy photons can generate a higher photovoltage, which could boost the overall power output. This approach also improves the photocurrent as the dots used in the front layer are virtually reabsorption free.

To transform a window into what they are calling a “tandem luminescent sunlight collector”, the Los Alamos team deposits a layer of highly emissive manganese-doped quantum dots onto the surface of the front glass pane and a layer of copper indium selenide quantum dots onto the surface of the back pane. The front layer absorbs the blue and ultraviolet portions of the solar spectrum, while the rest of the spectrum is picked up by the bottom layer.

Following absorption, the dot re-emits a photon at a longer wavelength, and then the re-emitted light is guided by total internal reflection to the glass edges of the window. There, solar cells integrated into the window frame collect the light and convert it to electricty.

The Nature Photonics abstract concludes, “Luminescent solar concentrators can serve as large-area sunlight collectors for terrestrial and space-based photovoltaics. Due to their high emission efficiencies and readily tunable emission and absorption spectra, colloidal quantum dots have emerged as a new and promising type of LSC fluorophore.

“Spectral tunability of the quantum dots also facilitates the realization of stacked multilayered LSCs, where enhanced performance is obtained through spectral splitting of incident sunlight, as in multijunction photovoltaics. We have demonstrated a large-area (>230 cm2) tandem LSC based on two types of nearly reabsorption-free quantum dots spectrally tuned for optimal solar-spectrum splitting. This prototype device exhibits a high optical quantum efficiency of 6.4% for sunlight illumination and solar-to-electrical power conversion efficiency of 3.1%.

“The efficiency gains due to the tandem architecture over single-layer devices quickly increase with increasing LSC size and can reach more than 100% in structures with window sizes of more than 2,500 cm2.