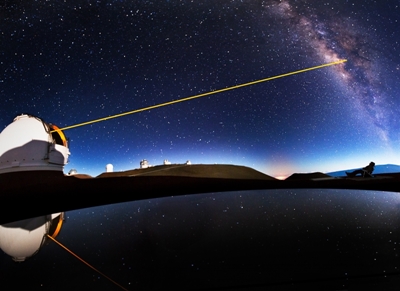 The W. M. Keck Observatory in Hawaii is set for a significant upgrade to its adaptive optics (AO) equipment that is expected to deliver better sensitivity and enable astronomers to directly image exoplanets orbiting low-mass stars.

Worth just under $1.8 million, the US National Science Foundation (NSF) award supporting the upgrade was approved earlier this year. The Keck team says that this will provide for a modern wavefront sensor camera and a faster real-time controller (RTC) for more rapid correction of atmospheric distortion.

“One of the most scientifically productive AO systems on Earth is getting a major upgrade, one that will further advance high-impact research on the hunt for habitable exoplanets, the supermassive black hole at the center of the Milky Way, and the nature of dark matter and dark energy,” announced the observatory.

AO pioneer
As the first facility to equip large-aperture telescopes with laser guide stars, the Keck Observatory has had a long association with AO technology. Peter Wizinowich, chief of technical development at Keck and a principal investigator for the NSF-funded upgrade, said:

“All major astronomical telescopes now have laser guide star AO systems. Despite this competition, Keck Observatory’s AO systems have remained the most scientifically productive in the world. This upgrade will help maintain our science community's competitive advantage.”

According to the NSF grant abstract, the upgrade will include the implementation of a fiber laser tuned to excite atmospheric sodium and generate the guide star. To reduce perspective elongation, this laser will be launched from behind the Keck telescope’s secondary mirror. “The new hardware will provide a one-magnitude sensitivity gain and allow the telescope to perform near its diffraction limit,” it states.

The camera upgrade will also reduce the readout and computation time so that images are corrected for atmospheric blurring more quickly.

Sylvain Cetre, a software engineer at Keck who is developing the new RTC, said: “Any delay means the correction is applied for atmospheric turbulence that has already started to change. Even if the correction happens in just a few milliseconds, we want to reduce the delay to a minimum. The new RTC computer and camera uses advanced technology to do just that.”

Exoplanet spectroscopy
As a result of the upgrade – expected to be complete by the end of 2020 – astronomers will be able to better characterize exoplanets via both direct imaging and spectroscopy. Other areas of astrophysics set to benefit are testing of Einstein’s Theory of General Relativity, monitoring supermassive black hole interactions at galactic centers, measuring the Hubble constant, and understanding dark matter and dark energy via gravitational lensing effects.

“These instrumentation improvements will not only enhance the scientific return of our existing AO system, but it will also provide an excellent platform for future improvements,” said Wizinowich. “We were very pleased to learn that our proposal was successful.”

The project will include placement of a post-doctoral researcher, as well as a Hawaii college student from the summer Akamai Internship Program.

Back in 2013, the Keck team raised $4 million to upgrade its AO equipment through philanthropic grants and gifts. That set of improvements included commissioning a new laser emitting at the 589 nm wavelength needed to excite sodium atoms in the upper atmosphere.

With AO, atmospheric distortion of these so-called laser guide stars is measured and fed back into the optical system via a deformable mirror to dramatically improve the resolving power of terrestrial telescopes.