Project led by the University at Buffalo shows clinical viability of compact lasers for biomedical imaging. 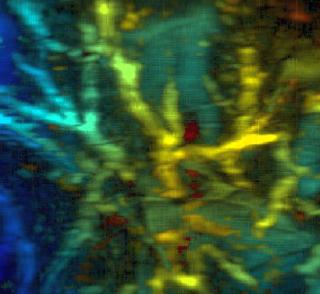 With optoacoustics having "come of age" as an imaging technique, the hottest topics in the sector now revolve around development of effective clinical systems for human applications.

Suitable laser sources are key to a smooth translation of the technology into real-world clinical use, but most systems to date have utilized relatively bulky flash-lamp-pumped lasers. These generate the power needed to ensure the desired conversation of optical absorption into ultrasound, but are in themselves not particularly efficient at turning electrical energy into light and can have an unhelpfully wide emission spectrum.

An international group led by Jun Xia of the University at Buffalo has now demonstrated a possible route to overcoming these hurdles and assisting the technique's clinical acceptance, through the use of a compact and high-power laser in photoacoustic computed tomography (PACT). The technique was applied to the in vivo study of mice and human tissues, in work published by Biomedical Optics Express.

"LED is the cheapest, with a good choice available in the visible light range where blood absorbs strongly. However, the output spectral width is broad, greater than 50 nanometers; and the pulse duration is long, above 100 nanoseconds. Laser diodes, especially the most recent ones, generate higher pulse energy than LED at the wavelengths of interest, with narrower spectral output but similar pulse duration. DPSSL provides the highest energy per pulse, the narrowest spectral width - below 1 nm - and the shortest pulse duration; however the wavelength choice can be limited."

Imaging human tissues
In its project, the group demonstrated the first use of a compact and high-power source for deep tissue in vivo PACT, and used a commercially available laser from Austrian developers Montfort Laser to do so - a source said to occupy only four percent of the volume and seven percent of the weight of the group's existing flash-pumped laser. It also met the most critical output parameters, these being a pulse duration below 10 ns for high spatial resolution and a pulse energy above 20 mJ.

"Before this study we had tried LEDs and photodiodes for photoacoustic imaging, but their pulse energies were too low to form a good image and we had to use gains of up to 80 dB, ie. 10,000 times amplification," said Xia. "After we obtained the Montfort laser, everything became much easier. The only challenge we faced was the irregular beam shape, a potentially significant limitation of diode-pumped sources when tight focusing is needed, and an issue that was corrected here with an engineered beam diffuser."

The team demonstrated the potential of the source for pre-clinical imaging by using it successfully in whole-body imaging and functional cardiac imaging of mice. After that, the same technique was used to image tissues on the right arm and left palm of two male volunteers, and the right breast of a female volunteer.

Although PACT had previously been shown to be feasible using a portable light source, the Buffalo study represents the first successful use of a compact source for this kind of 3D in vivo imaging using the technique. It also provided an imaging depth of 4.1 cm, said to be the first instance of photoacoustic imaging depth above 4 cm using a portable source, and a further indication that a compact laser approach is well suited for PACT applications.

Clinical impact
Other investigations into the use of compact sources for optoacoustics include the European FULLPHASE project, which is working towards a hand-held imaging probe for early diagnosis of diseases including skin cancer and rheumatoid arthritis; and the efforts of laser developer - and FULLPHASE partner - Quantel towards sources specifically designed for optoacoustics.

From his perspective as an advocate for portable optoacoustic sources, Xia commented that the Quantel portable laser had both advantages and disadvantages. "The small footprint, allowing it to be integrated into ultrasound probe housings, is beneficial, as is the high pulse repetition rate, enabling high-speed imaging or signal averaging," he commented. "The choice of multiple emission wavelengths is also advantageous for multi-spectral photoacoustic imaging."

However, a low pulse energy from the source can mean that an averaging operation is required to form a good image; and a large divergence angle makes beam shaping and fiber coupling more difficult, although Xia commented that the free-space light delivery used in the FULLPHASE project can address this issue. A final potential limitation is the pulse duration of around 100 ns - fine for some clinical uses, but too long for high-resolution small animal imaging.

"In terms of laser technology, Montfort use a laser diode to pump a Nd:YAG crystal, while Quantel directly use the output of the laser diode for imaging," Xia noted. "That is why Montfort's laser can generate a shorter duration pulse with higher pulse energy, although the output wavelength is limited to 1064 nm."

The appeal of optoacoustics in clinical settings is likely to produce solutions to these issues, as more compact systems expand the use of PACT and open research avenues for applications such as bedside clinical imaging, benchtop lab imaging, emergency medicine and mobile healthcare - areas where Xia expects the technology to have a real impact.

"There is now a trend to make the photoacoustic imaging system more portable, and currently the laser source is the major limitation," he said. "In the future, we would like to see more companies start to work toward this goal and develop portable, wavelength-tunable light sources."