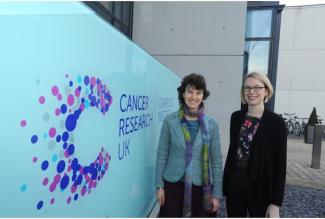 The prospects for early detection of esophageal cancer through better identification of the precursor lesion called Barrett's esophagus could now improve, thanks to a project by researchers at the Cancer Research UK Cambridge Institute.

It employed the two-pronged approach of synthesizing a suitable fluorescent marker able to stick to healthy esophageal cells but not to pre-cancerous cells, and the construction of a biomodal near-infrared and white light endoscope to image the tissues. The work was published in Journal of Biomedical Optics.

Researchers had tried this approach before, but used a dye that gave out visible light to spot pre-cancerous cells. Since exposure to visible light causes these cells to autofluoresce and naturally emit visible light themselves, the distinction between healthy and abnormal cells proved difficult to make.

Using a dye emitting near-infrared light instead - a fluorescent wheat germ agglutinin - refined the process and allowed the critical distinction to be made more effectively.

"People who are at a high risk of developing esophageal cancer, such as those with Barrett’s esophagus, could be closely monitored with this technique. And removing patches of pre-cancerous cells could prevent some cases of esophageal cancer. But we need to do some further testing before clinical trials with patients can be set up to see how effective the approach could be at saving lives."

Better detection needed
According to the team's paper, the problem of lack of contrast in white light endoscopy has been a consistent problem to date in detecting the premalignant dysplasia of cells in the esophagus.

The new endoscope is said to capture images of near-infrared and while light with a field-of-view of 63 degrees and an image resolution of 182 microns. The images are coregistered and artifacts arising from the fiber bundle employed in the platform are removed.

In tests the fluorescent label could be detected by the instrument at minimum concentrations of 110 nanomoles. "We demonstrated ex vivo that this system can distinguish between gastric and squamous tissue types in mouse stomachs and accurately detect fluorescence in human esophageal resections, compared with a gold standard imaging system," commented the team in the JBO paper. "Based on these findings, future work will optimize the bimodal endoscopic system for clinical trials in Barrett’s surveillance."

There are around 7,800 deaths from esophageal cancer every year in the UK, and for men it is the fourth most common cause of cancer death. Dr Emma Smith, science communication manager at Cancer Research UK, noted that early detection is crucial if lives are to be saved.

"Esophageal cancer is often caught at an advanced stage, meaning survival rates of the disease have remained stubbornly low," she said. "We urgently need new ways to detect the disease early. This development could lead to a cheaper, better way of detecting the warning signs of esophageal cancer and even stop some people developing the disease."

Sarah Bohndiek's research group is at the forefront of several research avenues related to cancer detection and tumor development, including the key role of blood oxygenation in the process - a potential route to effectively inhibiting the growth of tumors.