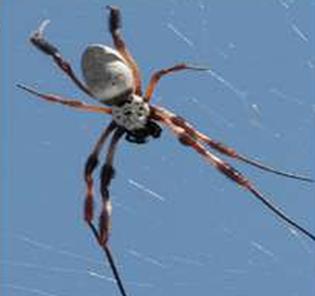 A modification to conventional white-light microscopy potentially boosting resolution towards 100 nanometers has been developed by a team from Bangor University and the University of Oxford.

It exploits the ability of silk spun from Nephila edulis, the golden silk orb-weaver spider, to function as a naturally occurring superlens and achieve a resolution beyond the natural diffraction limit, using near-field optical techniques.

This is said by the team to be the first time that a naturally occurring biological material has been used as a superlens, and the findings could now open a path to new solutions for integrating optics into biological systems.

Under Bangor's Zengbo Wang - whose group recently described the use of a non-metallic metamaterial based on titanium dioxide nanoparticles to enhance a microscope's resolution - the project used dragline silk of the Nephila spider as an additional cylindrical superlens, applied to the surface of the material under examination so as to enhance the overall magnification level.

"We have proved that the resolution barrier of microscope can be broken using a superlens, but production of manufactured superlenses involves some complex engineering processes which are not widely accessible to other researchers," commented Zengbo Wang. "This is why we have been interested in looking for naturally occurring superlenses provided by 'Mother Nature' which may exist around us, so that everyone can access superlenses."

Natural wonders
The project believes that the 6.8 micron-diameter spider silk achieves its super-resolution focusing by exploiting "photonic nanojets" - a phenomenon of illuminated dielectric microcylinders or spheres in which a narrow high-intensity light beam can emerge from the surface with a minimum beamwidth smaller than the classical diffraction limit.

Using the bio-lens as a complementary lens integrated with a classical white-light wide-field optical microscope, the group applied the system to the examination of an integrated circuit and a commercial Blu-ray disk - the same test subjects that Wang's group used for its titanium dioxide nanoparticle studies.

The modified microscope clearly resolved the sub-diffraction patterns of data recorded in the Blu-ray disk's 200-nanometer-wide channels, according to the team, when imaged in reflection mode using a halogen light illumination.

Future work could now include using the spider silk in a two-dimensional array, or extending the field-of-view through careful doping of the silk. And the work has already demonstrated that natural structures can still have things to offer optics researchers.

"It is very exciting to find yet another cutting edge and totally novel use for a spider silk, which we have been studying for over two decades in my laboratory," commented Fritz Vollrath of the silk group at Oxford's Department of Zoology.