Laser-based technique under development at the University of Nottingham promises new way to image inside lungs. 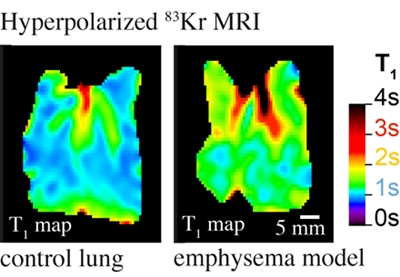 A laser-based enhancement to conventional magnetic resonance imaging (MRI) scanners could allow physicians a far clearer picture of lung disease, say researchers working on the technique at the UK’s University of Nottingham.

Thomas Meersmann and colleagues at the Sir Peter Mansfield Imaging Centre, named after the Nobel winning physicist who is still an emeritus professor at Nottingham, have developed an optical process that uses krypton gas as an inhalable contrast agent.

Known as spin-exchange optical pumping (SEOP), it allows the otherwise inert gas to be “hyperpolarized”, meaning that a detailed view inside the lung can be generated when a patient inhales the gas and holds their breath during an MRI scan.

“Traditional MRI uses hydrogen protons in the body as molecular targets to give a picture of tissue but this does not give a detailed picture of the lungs because they are full of air,” explains the Nottingham team. MRI works by using a radio-frequency probe to distinguish between different states of nuclear spin, and the “hyperpolarisation” technique aligns the noble gas nuclei in such a way that they show up on a scan.

Meersmann told optics.org that relatively recent advances in laser technology have been critical to the development of the technique, which it is hoped will begin clinical trials within a couple of years.

Thanks to funding from the UK’s Medical Research Council (MRC), the laser system’s power is currently being upgraded from 25 W to 100 W, so that it can produce larger quantities of hyperpolarized krypton for the Nottingham center’s whole-body 7 Tesla MRI scanner.

Laser hyperpolarization technique
By targeting specific electronic transitions in gas-phase alkali metal atoms, the “optical pumping step” of SEOP promotes a single electron in the outer s-orbital of these atoms into the p-orbital.

“Alkali metal electron spin alignment occurs if the light is circularly polarized and the light path is aligned with a weak external magnetic field,” Meersmann explains, adding that the generated “electron spin hyperpolarization” can then be transferred via gas-phase collisions to the nuclear spins of noble gas atoms.

That transfer creates the desired “nuclear spin hyperpolarization” that means the noble gases can be imaged using MRI.

That is partly because rubidium allows for an efficient spin exchange, but also because high-power, solid-state, laser diode arrays are available to provide the required rubidium transition at a wavelength of 794.7 nm.

And even though the linewidth of diode arrays is typically about 2 nm – described by Meersmann as “terrifying” for any self-respecting laser spectroscopist – holographic gratings reduce that linewidth figure by a factor of ten, which is narrow enough for efficient SEOP.

The array’s output is typically bundled through fiber optics and passed through a cube to ensure linear polarization, and then through a λ/4 filter to produce circularly polarized light. Telescopic optics produce a parallel beam with a diameter of 2-7 cm to illuminate the cylindrical SEOP cell.

Combustion breakthrough
The latest work by the Nottingham team, which has pioneered the technique, has demonstrated that it is possible to maintain the hyperpolarized state of krypton long enough for the noble gas to be inhaled, held in the lungs and scanned to generate a diagnostic image.

In a Proceedings of the National Academy of Sciences paper published earlier this month, they detailed how a new approach based on combustion generates hyperpolarized krypton gas at high purity, a critical requirement for pulmonary MRI.

Meersmann points out that krypton-83 and xenon-129, the two isotopes that tend to work best in terms of contrast imaging, also tend to lose their hyperpolarized state very quickly.

That problem can be solved by introducing a chemically reactive separation process, replacing the various gases that dilute krypton during SEOP with hydrogen. The hydrogen can then be removed through combustion, leaving behind a combination of benign water vapor and purified, hyperpolarized krypton.

“The krypton stays hyperpolarized throughout this rapid process, providing an approximate seven-fold MRI signal increase for this breathable MRI contrast agent. The concept can also be applied to produce hyperpolarized xenon to simplify its production and to reduce associated costs.”

“The construction and the costly upgrade of the 7T scanner to enable krypton detection is currently ongoing,” Meersmann said. “Within the next year we envision having the system running and [able] to collect all necessary preliminary data within the following year. That will help us for the approval process for a phase 1 trial.”

And although the regulatory approval process for contrast agents can be very lengthy and extremely costly, he believes that the new approach with krypton will benefit from previous work with other hyperpolarized gases that have moved further along the approval process.

Another remarkable possibility envisaged by Meersmann is that the technique could provide pulmonary screening diagnostics without the need for an MRI scanner.

“Hyperpolarized krypton may serve as screening agent in low-cost, bench-top devices, but this subject needs further exploration,” he said. “Conceptually, the screening procedure would identify patients for whom further investigation through the more costly MRI methods is justified.”

Although the work remains at a relatively early stage of development, the Nottingham team has just filed a patent on the new hyperpolarized production technique, in addition to an earlier patent that protects the basic diagnostic approach.