Future of SBIR and STTR programs secured in compromise agreement for US National Defense Authorization Act. 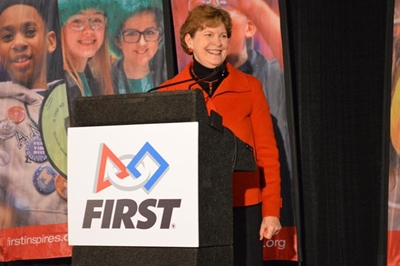 Photonics community representatives have welcomed a proposed five-year extension for popular small-business research and development programs in the US.

A compromise agreement finalized earlier this week between the House of Representatives and Senate should see Small Business Innovation Research (SBIR) and Small Business Technology Transfer (STTR) efforts extended under all federal funding agencies, as part of the National Defense Authorization Act (NDAA).

“While SBIR and STTR do not expire until fiscal year 2017, Congress’ actions now ensure stability for the programs for several years.” Earlier attempts to reauthorize the programs against a deadline had created the potential threat of either a shutdown or a string of stop-gap measures, as had been the case prior to the most recent extension.

The language included in the NDAA, which is expected to pass within the next few days, includes the mention of a five-year extension – although Jeanne Shaheen, a senator for New Hampshire and lead Democrat on the Small Business Committee, has been pushing for permanent authorization.

That is partly on the basis that since the Department of Defense (DoD) accounts for around half of all SBIR and STTR funding, the programs are crucial for national security.

In a statement after the compromise agreement was reached, Shaheen said: “The SBIR and STTR programs have a proven track record of success and have enabled entrepreneurs in New Hampshire and across the country to engage in the research and development that keeps America at the forefront of innovation.

“These programs have bipartisan support because they unleash the innovative potential of America’s high-tech businesses to drive our country’s growth, contribute to our national defense and meet urgent public needs.”

Shaheen added that the programs had faced “major uncertainty” after Congressional inaction since the six-year re-authorization agreed in fiscal year 2011 that was due to expire September 2017.

“The innovations they have generated have been a great source of high-paying job creation, and have driven continued technological superiority. I am really pleased to see Congress take this action to re-authorize the SBIR and the STTR programs.”

And the society’s CEO Eugene Arthurs added that the programs – regarded as a key source of seed capital for emerging companies and technologies - have had a significant influence on the photonics industry, noting:

“These programs have been important in advancing research to product, and have become models for this critical step in the innovation chain. Many companies and many jobs in our field have come about because of SBIR/STTR support.”

Recent examples of SBIR-funded photonics technology development include solar windows made by the quantum-dot startup UbiQD backed through the National Science Foundation, and a novel low-cost carbon nanotube mirror that could be deployed by CubeSats that was supported via NASA.