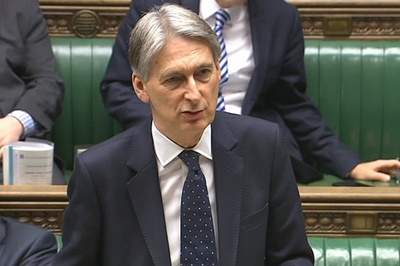 Chancellor of the Exchequer Phil Hammond

The UK government has outlined a large increase in research and innovation funding, in a bid to boost flagging productivity and spur investment amid the expected negative economic impact of the Brexit vote and weaker GDP growth.

Although detailed plans are yet to emerge, measures likely to impact the photonics sector in some way include £700 million to be spent upgrading fiber-optic and wireless communications infrastructure, and an eventual £2 billion increase in annual research and development spending. A significant amount of that money will be deployed via a “substantial” increase in grants awarded by the Innovate UK funding body.

After revealing a £23 billion total spending plan called the “National Productivity Investment Fund (NPIF)” – from which the additional research and innovation cash will be drawn – Hammond added:

“We do not invest enough in research, development and innovation. As the pace of technology advances and competition from the rest of the world increases, we must build on our strengths in science and tech innovation to ensure the next generation of discoveries is made, developed and produced in Britain.”

The move represents the latest attempt to address the ongoing weakness in the productivity of the UK’s economy, which lags well behind the US, Germany and others. According to the Campaign for Science and Engineering (CaSE), UK spending on research currently stands at just under 1.7 per cent, and the new plan will increase that to 2 per cent by 2020.

Hammond also announced that £400 million of government money would be funnelled into venture capital funds, in the latest attempt to convert the UK’s strong science base into more tangibly economic benefits – long seen as a significant weakness. 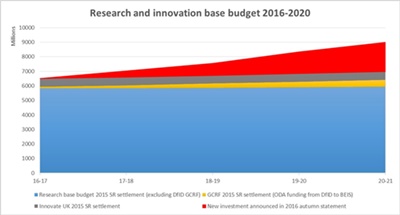 On the up: UK research spending (click to enlarge)

That money will be provided via the “British Business Bank”, whose annual budget will start at £15 million in 2017-18, rising to £75 million in 2020-21 with a target of unlocking as much as £1 billion total investment in UK tech firms looking to scale up.

Positive response
Science and technology advocates and interest groups in the country responded positively to the spending commitment and innovation focus, with CaSE director Sarah Main describing the move as “truly exciting”.

“It is a real boost to see UK strength in science being championed by the Prime Minister and backed with what is the most significant investment in R&D I can remember,” Main added, pointing out that researchers would retain the management of the additional funds under the new UK Research and Innovation (UKRI) funding body made up of the seven research councils and Innovate UK.

“To stay cutting edge, it will be vital that balance is maintained between discovery-led and challenge-led programmes, but I am encouraged that these decisions will rest with UKRI,” Main said, although she also noted that the Small Business Research Initiative could be more effective – something acknowledged by Prime Minister Theresa May ahead of Hammond’s statement.

CaSE points out that the extra funding should ultimately boost total public and private R&D spending in the UK to 2 per cent of GDP by 2020 – still some way off the 3 per cent level recommended by the OECD for advanced economies, but in Main’s words a “huge step in the right direction”.

DARPA model
Within the NPIF budget is a new “Industrial Strategy Challenge Fund”, which will be modelled on the US Defense Advanced Research Projects Agency (DARPA) and administered to a large degree via Innovate UK.

Innovate UK’s chief executive Ruth McKernan said in her response to the new spending plan that the support for business-led innovation was “potentially game-changing”.

She added: “The industrial strategy challenge fund in particular is a substantial increase to the amount of grant funding available to businesses through Innovate UK. It complements our plans to evolve our funding models and broaden the range of support available for innovations at all stages of development.”

Others to respond positively included the Royal Academy of Engineering’s president Ann Dowling, who said:

“The investments announced today and the formation of a new industrial strategy represent a major opportunity to get Britain back on its feet, and to accelerate the growth of emerging technologies - such as robotics – that are going to have the most transformative impact on society in years to come.”

Dowling also welcomed the additional investment in communications infrastructure, but warned that the UK would need to work hard to ensure that it had enough skilled engineers to deliver that and other projects – especially in the light of the Brexit vote.

The Brexit risk was also referenced by the Royal Society of Chemistry chief executive Robert Parker, who welcomed the positive signals but added: "Science in the 21st century is truly global and we are as committed as ever to enabling our community to continue to forge links across nations and disciplines.

"To deliver on its ambition for Britain to become ‘the global go-to place for scientists’ the government must match today's positive announcements about R&D funding with an equally clear signal to reduce the current uncertainty about EU researchers from outside the UK who are working here."

Chancellor: We will invest in our digital infrastructure to catalyse investment in fibre networks and 5G trials #AutumnStatement pic.twitter.com/l3VvlyV7Pf

Meanwhile Venki Ramakrishnan, president of London's Royal Society, said Hammond had rightly recognised that future economic growth and prosperity depended on improving productivity, and that in turn can be driven by research and innovation, adding:

“This commitment to an additional £4.7 billion new investment in science and innovation over the next four years alongside the other investments in infrastructure are welcome steps as we negotiate the risks and opportunities of leaving the EU."

Providing a point of view from the business community Carolyn Fairbairn, director-general of the Confederation of British Industry, described the innovation spending plan as "ambitious", and the largest increase in more than three decades.

“The development of an evidence-based Industrial Strategy Challenge Fund, alongside additional funding for research and Innovate UK grants, make clear that government has recognized the central role science and innovation play in growing a modern, productive economy," Fairbairn added.

“Further funding for venture capital through the British Business Bank will be positive for the overall innovation ecosystem, helping start-ups to scale up. Ultimately, business will be keen to work with government to raise our overall level of R&D spend towards 3 per cent of GDP."