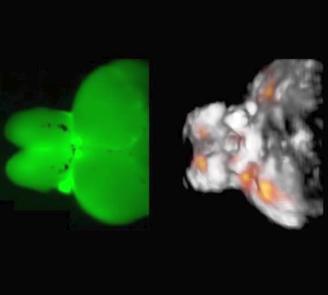 Optoacoustic imaging of the brain

These methods, however, have to date been limited to modest scanning depths and volumes, and imaging activity deep within the scattering tissues of the brain has remained a challenge.

A team at Helmholtz Zentrum Munich and the Technical University of Munich (TUM) has developed a new technique that might help overcome this hurdle, using a new variant of optoacoustic microscopy. The work will be published in Light: Science & Applications.

Optoacoustics is also the subject of considerable high-profile research, thanks to its ability to image hemoglobin in different oxygenation states, and so probe hemodynamics and blood flow at scanning depths in the centimeter range. Steps towards applying optoacoustics successfully to brain imaging are under way in several research centers, and will be a topic of discussion at SPIE's Photonics West event in January 2017, making this new breakthrough potentially even more significant.

The new technique, christened functional optoacoustic neuro-tomography (FONT), applies the optoacoustic principle not to hemoglobin, but instead to the fluorescent calcium markers usually imaged by light-sheet microscopy and similar modalities during neural activity.

"We hypothesized that some fluorescent genetically encoded calcium indicators (GECIs) could provide a suitable calcium-dependent optoacoustic contrast," commented the team in its paper. "Our study is, to the best of our knowledge, the first to examine the optoacoustic signature of modern GECIs, showing that the strong changes in fluorescence are directly related to that signature."

Neural activity in three dimensions
The experimental FONT platform developed by the project was used to image calcium activity in both immobilized and free-swimming zebrafish larvae, bred to exhibit expression of a particular calcium sensor in a large fraction of its neurons. It was also applied to isolated brains from larger adult zebrafish.

"So far we have demonstrated real-time analysis on whole brains of adult animals of roughly 24 mm3," said group leader Daniel Razansky, who commented that current state-of-the-art optical microscopy methods are limited to volumes well below a cubic millimeter when it comes to imaging of fast neural activity. The project team believes the FONT platform to be capable of visualizing volumes of more than 1000 mm3 with temporal resolution of 10 milliseconds.

This kind of large-scale observation of neural activity is the key to understanding how the brain works, both under normal and diseased conditions. The ability of FONT to simultaneously track movements and neural activation in three dimensions from living unrestrained organisms could form a basis for behavioral studies not currently possible with other optical neuroimaging techniques, while the complementary information about hematology also available from an optoacoustic approach would help illuminate the coupling between vascular changes and the nervous system in more complex animal models.

"Thanks to our method, one can now capture fast activity of millions of neurons simultaneously," he said. "To draw a parallel with social media: in the past, we were able to read along when a nerve cell placed a message with a neighbor; now we can also see how this message spreads like wildfire."