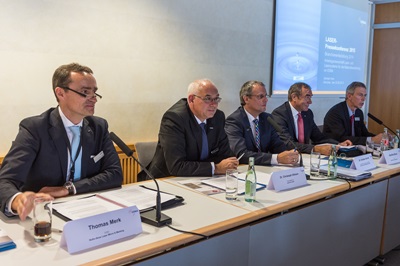 The unexpected departure of long-time CEO Günther Braun from laser company Rofin-Sinar could have been prompted by an “activist” investor recently acquiring an 8.4 per cent share of the firm’s stock.

According to a source familiar with the situation, the new investor - Silver Arrow Capital - sees the potential for Rofin to simplify its operating structure and improve profit margins. Former Oerlikon CEO Thomas Limberger is the key protagonist at Silver Arrow, and has a history of restructuring and streamlining company operations.

There is a school of thought that Rofin's organizational structure is far more complicated than is needed for what - by industrial standards - remains a relatively small company, and that various facilities and back-office functions could be consolidated more effectively.

A US Securities & Exchange Commission (SEC) filing dated May 7, the same day that Rofin released its latest quarterly financial results, details an agreement involving Limberger and Silver Arrow, as well as Dubai-based SAC Jupiter Holding and Pluto Fund Limited – a company registered in St Vincent and the Grenadines. Osama H Al-Sayed and Abdullah Saleh A. Kamel, both from Saudi Arabia, are also listed as being involved.

If the new investors did indeed prompt Braun’s exit, then it did not take long. Rofin announced the former CEO’s departure less than a month later, on June 5.

Photonics history
Limberger does have some history in the optics and photonics business. During a two-year stint as CEO of the Switzerland-based industrial equipment firm Oerlikon, he restructured the company by centralizing its management but sparked controversy when it was revealed that he had been awarded an annual pay package – later reduced - equivalent to CHF 26 million.

He also oversaw a series of acquisitions and investments during his time in charge. For example in June 2006, when Oerlikon was still known as Unaxis, its coatings division Unaxis Optics made a strategic investment in the Californian semiconductor laser developer Novalux. Unaxis had planned to mass produce RGB laser modules based on Novalux chips for the displays industry.

Then in late 2006, under the new name of Oerlikon, it acquired the UK-headquartered laser firm Exitech, with the company intending to use the technology in the production of photovoltaic cells.

With Rofin having now established what looks to be a competitive set of multi-kilowatt fiber laser products thanks to its third-generation module technology and internally fabricated laser diodes, some observers see an opportunity for the company to mount more of a challenge to market leader IPG Photonics.

However, the increasingly crowded world of kilowatt fiber lasers will not make it easy for Rofin’s new CEO Thomas Merk to capitalize on that opportunity.

Rivals Coherent, JDSU, nLight and Trumpf (via SPI and JK Lasers) were among those also showing off new multi-kilowatt products in Munich, while increased competition from China could result from Han’s Laser’s plan to raise capital – the current crisis impacting the Chinese stock markets notwithstanding.