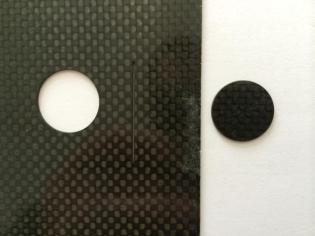 In the cut: processing CFRP with lasers

Composite materials such as carbon fiber reinforced plastics (CFRP) are attractive to engineers in several manufacturing sectors, thanks to the combination of high stiffness, light weight and fatigue resistance that they can offer.

This in turn has led to a need for processing techniques tailored specifically to these materials, since established machining operations developed for metals can yield poor results when applied to CFRP.

Lasers could have a big role to play in these new approaches, with modern fiber-lasers now offering engineers compact and robust sources suitable for use in shop-floor environments.

A group at Liverpool John Moores University (LJMU) has been developing laser-based machining processes for composite materials, and at the recent Industrial Laser Applications Symposium organized by AILU discussed its research into surface texturing as a means to improve the bond between CFRP components joined by adhesive.

"The adhesive bond strength depends on how effectively the adhesive spreads over the surfaces of the substrates," commented Paul French of LJMU. "Mechanical abrasion of the surfaces is an established way to improve the bonding, by creating small irregularities on the surface; but such manual abrasion or grit-blasting operations can be problematic for operators."

Plasma treatment has been used as an alternative, altering the surface chemistry of the components so as to enhance the eventual chemical bond. But lasers could be a better route than either method.

Predictable behavior
"We used an infra-red source from SPI Lasers to create hatching patterns on the surface of the components, and compared the effects with those obtained with plasma treatment," said French. "The laser approach means we can control exactly how much material is removed and what kind of surface pattern is left behind."

Testing proved that although the laser treatment did not alter the surface chemistry, and hence had no automatic effect on the adhesive bond strength, it did make the eventual failure of the bond more consistent.

"Using lasers to roughen the surface narrowed down the standard deviation of the failure loads, and made the joint more predictable," noted French. "We are now considering ways to enhance the process and perhaps include some chemical improvement to the surfaces in our procedure as well; a hybrid system, perhaps."

Research into improved adhesive bonding is one part of LJMU's wider study into the advantages of lasers for composite materials processing. Another is their use for direct cutting and machining of CFRP, where the complex interactions between incident beam and workpiece can have a significant effect on the success of the operation.

"If you try to cut CFRP as if was just a black metal, then problems will occur - especially if the result is intended for use in aerospace applications," French commented. "There are some end uses where you can live with a reduction in the quality of cut; but for aerospace and some other sectors this is of course not the case."

The solution developed at LJMU incorporates a milling function into the laser's action on the composite, rather than just a straight cutting force. This helps to control the thermal effect of the beam on the composite and limits other potential complications.

LJMU has recently been involved in supplying such a laser machining system to a company in the biomedical sector. "This method can take longer, in comparison with other approaches to cutting composites; but it ensures that the quality needed for this particular biomedical application is there," French said.

On the shop floor
Although the advantages of lasers in advanced materials processing are becoming clear, the penetration of the technology into the manufacturing sectors most likely to benefit has not been as rapid as some had hoped. French feels that the UK is lagging behind the pace set by Germany for developing such systems and getting them to market.

"As yet I don't see a lot of this technology moving towards the shop floor, partly because of the conservative attitude of the aerospace sector towards new machining operations," he commented. "But the technology is maturing to the extent that aerospace prime contractors are now aware of it, and once that awareness filters down it will foster an acceptance of these approaches."

Recent advances in the lasers themselves have played a part in that process. French pointed to current fiber-laser technology as offering contractors access to sources that could be readily incorporated into shop-floor work-flows, without the need for overly careful handling or more exotic operating conditions.

There are also economic benefits to be had. "All our work so far on machining of composites has been carried out with a relatively inexpensive commercial laser platform," commented French, who noted that developers are sometimes under the impression that laser systems for advanced materials will automatically be expensive. LJMU is aiming to develop complete technology platforms costing £50,000 to £100,000, within reach of small SMEs or individual operators.

This should ensure that developers in sectors away from aerospace will also be able to reap the benefits. LJMU's work with a biomedical customer points the way towards increasing use of lasers to micro-machine surfaces as a way to control how cells then interact with those substrates.

"All these approaches to surface modification through lasers are showing real promise," said French. "This is a very lively area."