Smaller and more efficient version of the digital micromirror device technology is designed for handheld spectrometers. 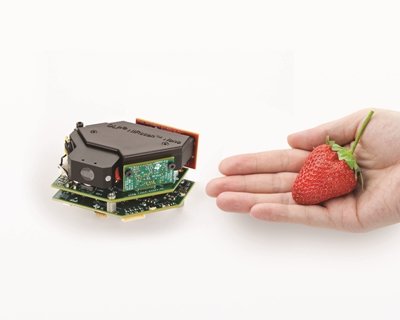 The company, which is launching a version of the digital micromirror device (DMD) optimized for near-infrared applications at this week’s Pittcon 2015 analytical science exhibition, says that the latest MEMS-based chipset is its smallest and most efficient yet.

Last year, the company made a similar announcement at the same event, launching an earlier version of DLP that was being used by Ibsen Photonics inside its OEM spectrometers.

The latest chipset combines TI’s near-IR optimized DMD with integrated power management and controller devices to create what it claims is the industry’s first fully programmable MEMS device for “ultra-mobile” analysis across the 700-2,500 nm wavelength range.

“Application areas include farming, food and drink, petrochemical, health, and skin care industries,” says TI, adding that the latest technology will improve on the signal-to-noise ratios possible with other mobile spectrometers dramatically, while cutting the power consumption of previous DLP architectures by as much as 50 per cent.

An evaluation module based on the chipset, known as the DLP NIRscan Nano EVM, is also available, offering what TI says is an “industry-leading cost point” for laboratory analytics, making the technology accessible to optical module developers, electronics and software firms, and applications developers alike.

Offering a wavelength range of 900-1,700 nm in a pocket-sized (90 cm3) format, it is said to complement its high-resolution predecessor, the DLP NIRscan EVM, which uses an extended InGaAs detector to operate between 1350 nm and 2450 nm.

Those interested in developing products for infrared spectroscopy based on the latest version of DLP can make use of TI’s DLP Design Network - a group of independent companies that provide hardware and software integration, as well as optics design, system integration, prototyping, and manufacturing services.

Following the Pittcon launch, TI says that the new DLP chipset will be available from April onwards, with the related evaluation module set to appear around the same time.