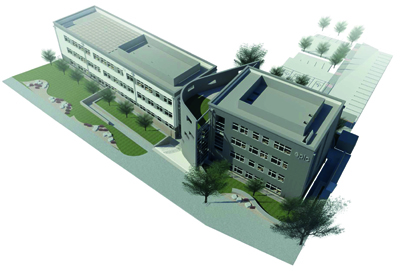 Torbay in the south west of the UK will see the development of a new research and business center dedicated to photonics and electronics, after raising funding totaling more then £6 million. The latest tranche of £3 million, which ensures that the plans devised by Torbay Development Agency (TDA) will proceed, was announced at the end of January.

To be built in Paignton, and scheduled to be operational by 2017, the Electronics and Photonics Innovation Centre (EPIC) will create up to 220 jobs and capitalize on the region’s association with high-tech companies. Locally-connected companies that are supporting the development of EPIC include Oclaro, Gooch & Housego, Spirent Communications and II-VI Photonics. Devon-based firms also expected to participate include Eltek Semiconductors, Elektron Technology, and Alpha Contract Engineering, among others.

The TDA proposal for the EPIC states, “Fiber optics systems made in Torbay are widely used in aerospace, biomedical, laser and telecoms applications. Notable customers include the likes of BT, Thales, Leica and Zeiss, NASA as well as the European Space Agency. Furthermore, nearly every smartphone has a chip in it tested on Spirent equipment.”

Academic support for EPIC could be provided by the nearby Universities of Exeter and Plymouth, which are both already involved with the Torbay Development Agency’s Hi-Tech Forum, which itself is a cluster member of the European Photonics Industry Consortium. South Devon College is also developing a new high-tech training centre opposite the EPIC site on the White Rock Business Centre.

Suzie Masterman, Senior Economic Development Officer at the TDA, told optics.org about why this is the right time and place for a photonics and electronics hub. "The TDA and the Hi-Tech Forum have been developing proposals for the EPIC since 2012. We have received financial support from the UK Coastal Communities Fund, the Government’s Growth Deal with the Heart Of South west Local Enterprise Partnership and from Torbay Council, and we plan to submit an EU grant application. Our total target is to invest £8m in EPIC but we have already secured enough funding to start work later in 2015.”

“We are currently in discussion about the precise nature of the equipment that will be installed at the EPIC; it may be a beta site. We want to have equipment to benefit the photonics and electronics businesses. One consideration is that there could be commercial sponsorship of the facilities.”

Considering the development of the EPIC, Martin Foulger, Chair of the Torbay Hi Tech Forum said, “This is great news for the electronics and photonics industry in Torbay and will enable us to move the Innovation Centre from a planning stage into reality. The Forum has been instrumental in supporting this project and members will be excited to see it become a reality.”