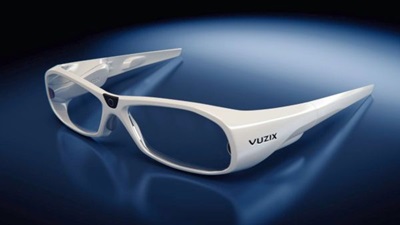 Smart investment? Intel has bought a 30% share in Vuzix

Intel has invested just under $25 million in Vuzix Corporation, giving it a 30 per cent stake in a company that is busy developing smart glasses based on novel optical waveguide technology.

According to a US Securities & Exchange Commission (SEC) filing by the Rochester, New York-based Vuzix, Intel has acquired its equity position in the form of convertible Series A preferred stock.

News of that sent Vuzix’ share price – the company’s stock is listed on the over-the-counter market in the US – soaring, because the $5 initial conversion price of the acquired stock was substantially higher than its value before the Intel agreement was announced.

The Vuzix smart glasses have inevitably been likened to Google Glass, but unlike Google the Rochester firm has been working on the technology for almost two decades. The injection of cash should help Vuzix to bring its latest smart glasses to the consumer market and give it more clout to rival Google.

In an interview with optics.org last year, the company explained that, unlike most other smart glasses protagonists, its eyewear designs are not now based on light projection. Instead, they use tiny transparent waveguides etched into the lens to deliver what is claimed to be a superior viewing experience.

As one of the earliest developers of the technology, Vuzix also owns some fundamental intellectual property relating to smart glasses – something that would no doubt have been a key factor in Intel’s decision to invest.

Consumer prototype as CES
Vuzix is also due to show off a next-generation prototype at this week’s Consumer Electronics Show (CES) in Las Vegas. According to the company its latest smart glasses will feature an optical engine small enough to fit entirely inside the frames of conventional spectacles.

David Lock, from Vuzix’ European office in Oxford, UK, told optics.org last October: “A move to waveguides is going to dramatically transform head-mounted displays. There are significant opportunities to use it in different products, now that the manufacturing technology has been perfected, although ultimately customers will buy the features and benefits it brings rather than the optics. As with the smart phone sector, the applications are what will now drive this technology.”

As far as the Intel investment is concerned, Vuzix said that it would be used for general working capital, and to help accelerate the introduction of the next-generation smart glasses for the consumer market.

But Intel also looks set to add significant expertise. The SEC filing states that the preferred stock purchase gives it the right to appoint two members to Vuzix' board of directors, in addition to the company's current five members.

The same document adds that holders of loan notes that were issued by Vuzix in June 2014 have waived all rights designed to protect their equity positions from being diluted, as part of the Intel investment.

In September 2014, Vuzix said it had installed new tooling for laser lithography as part of a manufacturing upgrade designed to enable the company to target more market sectors with its smart glasses.

It has also been working closely with nearby Rochester Optical and electronics giant Lenovo as it bids to ramp production.