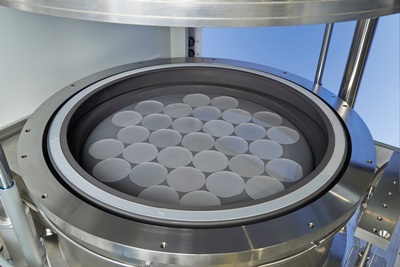 Tawian’s Epistar, one of the world’s largest manufacturers of the compound semiconductor wafers from which LED chips are produced, is to expand again with the acquisition of Taiwan Semiconductor Manufacturing Company’s (TSMC’s) emerging solid-state lighting subsidiary.

The deal comes less than a month after Epistar also acquired its former rival Formosa Epitaxy, which is also based in Tawian. An outlay of NT$825 million (approximately $25.9 million) will see Epistar take a 94 per cent equity shareholding in TSMC SSL, by acquiring all the shares currently owned by TSMC and its subsidiary TSMC Guang Neng Investment Ltd.

Hsinchu-based Epistar announced that it would manage the company alongside TSMC SSL’s current team. It wants to take advantage of the manufacturing expertise inherited from the parent company, which is the world’s largest semiconductor foundry, as well as some novel LED lighting designs.

“Recently [TSMC SSL] has developed high-efficiency LED lighting products using an innovative Phosphor-on-Die (PoD) chip-scale packaging technology,” Epistar said in a statement. “However, the company has struggled to reach profitability due to oversupply following the massive expansion of the LED industry in the past several years.”

As a late entrant to the LED business (the subsidiary was founded as recently as 2011), TSMC SSL has faced problems in a sector where intellectual property has traditionally been something of a legal minefield.

On the other hand Epistar has been operating in the sector for nearly two decades, during which time it has emerged as the world’s largest manufacturer of LED epitaxial wafers and dies, with a huge investment in the key equipment needed to grow light-emitting semiconductor structures.

Crucially, and following some drawn-out patent litigation, it has also agreed cross-licensing deals with key players like Philips and Japan’s Toyoda Gosei.

Different thinking
In Epistar’s statement, the company’s long-time CEO B.J. Lee said: “TSMC SSL’s capacity may be far less than Epistar, but by working with TSMC we can be introduced to different thinking, different talent, and different systems from across industries to spark new ideas and strengthen Epistar’s future operations.”

The deal comes amid expectations of a major ramp in demand for LED lighting products over the next two-to-three years, with the cost of solid-state lighting technology increasingly competitive with its lower-efficiency predecessors.

That will require Epistar to make a lot more gallium nitride (GaN)-based epiwafers to support the market’s anticipated growth and the company has responded with a major effort to consolidate the industry.

In late December, the company agreed a share swap deal with Formosa valued at around $55 million that will increase its capacity dramatically. The TSMC deal gives it less of that, but will bring expertise from the giant silicon foundry as Epistar looks to do for the lighting industry what TSMC did for silicon semiconductors.

Unveiled at the Light + Building trade show in Frankfurt in March 2014, TSMC SSL’s “PoD” technology is used to encapsulate flip-chip LED dies in a phosphor coating. The approach is said to allow features such as wide-angle lighting that are difficult to achieve with the typically more directional nature of SSL.

• Last month, optics.org publisher SPIE handed its “visionary” award to long-time TSMC chairman Morris Chang, recognizing the impact that the company has had on the semiconductor industry – and therefore the wider technological world – and its role in using optical lithography to maintain the rule of Moore’s law.