SPIE's analysis of sales and businesses is “a valuable resource for investors, policy makers”.

The global photonics market is worth at least $150bn, according to analysis by SPIE, the international society for optics and photonics (and owner of optics.org). The data were presented last week (4 September) by SPIE’s Industry and Market Strategist Steve Anderson at the annual meeting of New York Photonics (NYP) at Rochester Museum & Science Center. Anderson described the analysis as “valuable information for industry leaders and academic researchers seeking to communicate the impact of the field.”

Moreover, it is a valuable new resource for venture capitalists and policy makers seeking the best investment directions to ensure future economic strength and national security. At the NYP meeting, Anderson was one of a panel of experts who focused on the effectiveness of the model of national centers of excellence for manufacturing and innovation. 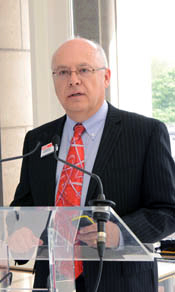 The numbers on the worldwide photonics core components market were the second phase in an ongoing SPIE initiative The first phase was announced at SPIE Photonics West in San Francisco, California, last February, and reported similar data for 1,008 of the more than 1,500 exhibiting companies at this year’s BiOS Expo and Photonics West Exhibition.

Anderson commented that the SPIE analytics team's next project will focus on the size of photonics-enabled markets worldwide. He said, “The data has been welcomed by industry audiences around the world, who appreciate the report’s transparency – which is an important factor for credibility.”

The study results aggregated photonics company sales and employee data using information from business analysis company Dun & Bradstreet (D&B) as well as public information combined with regional statistical benchmarks derived from the SPIE team’s analysis of D&B data. SPIE also conducted an in-depth review of out of range data, and prorated revenue and employment based on estimates of actual photonics-related sales. Companies with total sales of less than $10m were assumed to be 100% photonics.

The impact of being able to provide policy makers in particular with estimates about the jobs and revenue generated by the photonics industry is evident in regions such as Europe, where photonics has been identified as one of six Key Enabling Technologies, Anderson said. “The KET recognition has helped pave the way for photonics projects to apply for major funding initiatives, and has helped raise the profile of the field among young people planning their careers.”

Institute of photonics for defense

A key topic of discussion at the NYP annual meeting was what the establishment in Rochester, NY, of a possible new Department of Defense (DoD)-backed institute focused on photonics would mean to the region. The DoD institute would be part of the President's National Network for Manufacturing Innovation initiative.

Also addressed was the opportunity to raise much broader awareness of the field of photonics offered by the United Nations-established International Year of Light and Light-based Technologies 2015. The observance is a "once-in-a-lifetime" chance to draw attention to the many ways optics and photonics technologies improve life, through applications in healthcare, security, communications, manufacturing, education, entertainment, and other areas, Anderson said.

Anderson is also this week presenting the SPIE global market report in France during the second annual LAPHIA International Symposium, being held at the Institut d'Optique d'Aquitaine, Université de Bordeaux, between September 8-12.