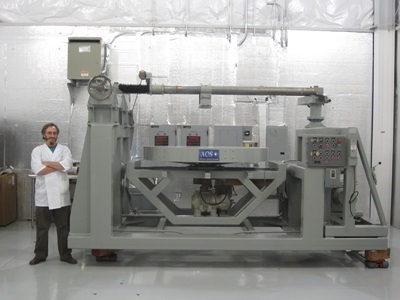 by Ford Burkhart
“Optics Valley” is Tucson’s nickname for good reason. Here they can fabricate a huge lens or mirrors for the biggest projects in the world. It’s where a start-up called Arizona Optical Systems (AOS) could leap from a garage-scale operation to a top-ten US company in its niche: optics for defense, aerospace and astronomical systems.

“We make one-of-a-kind systems,” said Marty Valente, AOS president. “We build all the technology to make and test things and to push the frontiers of that technology.”

Started in 2009, AOS grew quickly from its three guys in a garage to 16 full-time optical and mechanical engineers, technicians and others. It now operates in 10,000 square feet of testing and manufacturing space, on a quiet street in west Tucson. It plans to shift to a 30,000 square-foot site soon, and to expand to 20 fulltime positions.

One story the team loves to tell is about building a large-scale, high-precision optic, along with the robotic machinery needed for its manufacture and test, and a complete test tower.

Northrop - the company’s very first client - was in a big hurry to obtain the 1.5 meter off-axis mandrel for a technology demonstrator aimed at low-cost, space-qualified optics. The mandrel was set to be used as a “master” optical surface from which replicas were formed, and the defense firm gave AOS one year. “We had a short fuse to get everything up and running,” recalls Valente.

Arizona pedigree
First, the AOS team built a tower, a white steel giant in a 30-foot high bay that still dwarfs the people walking below it. The tower included a 1.7 meter mirror (held by vacuum) used to test the mandrel, as well as a complete motion-control system for aligning and testing the part. Next, they designed and built custom robotic equipment to manufacture and test the mandrel to unprecedented accuracy.

As prescribed by Northrop, it was all done within a year. “That was exciting to say the least,” said Mark Smith, director of engineering and operations.

Valente was the director of optical engineering and fabrication at the University of Arizona’s College of Optical Sciences (OSC) for 20 years. There, he worked with AOS co-founder Jim Burge, now the company’s CTO. Burge is also a professor of optics and astronomy at the institution, currently celebrating its 50th year, while Smith previously worked at ITEK, Northrop and Xinetics.

While he was still at OSC, some of the world’s leading aerospace and defense companies gave Valente a challenge. “They encouraged us to use our spin-off potential for a company with the ability to see things all the way through,” Valente said. “We work at the system level with our customers, and we do full production, from A to Z.” 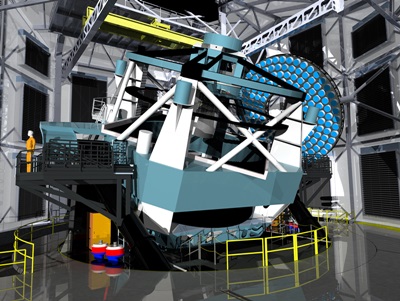 Synoptic Survey lenses: cutting costs
Typically, clients come to AOS with a goal in mind, and AOS will often work with them to evaluate the top-level requirements needed to meet that goal. Valente said, “We can give them the best value, and get to the end results in a new way.”

For example, the company was recently awarded a contract to manufacture two large lenses (1.2 meter and 1.5 meter diameter) for the L1-L2 camera assembly element to be used on the Large Synoptic Survey Telescope (LSST) in Chile, an 8.4 meter “open access” telescope partly funded by Microsoft founder Bill Gates.

The corrector lenses will transmit light to a massive mosaic of CCD sensors that will comprise the world’s largest digital camera, atop an 8,800 foot mountain. The public-private project is backed by the National Science Foundation and the US Department of Energy, and once complete the telescope is expected to capture a staggering 30 terabytes of data per night.

“The lens specifications had been floating around for years,” Valente said. “Over time, the specs were carried forward from the days when ‘person X’ was looking at it. We are helping to change the specs in a way that provides better performance, and eliminates excessive cost.

“We build relationships, based on our ability to team with customers at the system level. They recognize the value in one project and they come back with other things.”

Pentaprism system
Another story began when NASA’s Goddard Space Flight Center showed up with a request a year or so ago. “They had a mirror in a basement, and wondered if they could use it with a new telescope yet to be launched,” said Valente. “They came to me and asked, ‘What are the AOS capabilities?’ Soon they awarded us a contract.”

AOS calibrated the mirror to help Goddard make measurements of the telescope system at temperatures simulating the super-chilled space environment. The quality of images varies as a function of temperature, and AOS had to construct a 20 x 20 foot thermal chamber inside their facility.

Using a scanning pentaprism system, which redirects light by 90 degrees, to measure the slope across the mirror’s surface, their measurements provided a surface map of the mirror at various temperatures.

Goddard returned with a new request, this time for a 36-inch mirror, to be measured in its mount, in a horizontal test configuration.

“We finished those two for Goddard,” Valente said, “and then they came back again, with a contract for a prototype space telescope.” AOS is now working on that project, part of eLISA, a joint effort between several European countries and NASA Goddard to launch a gravitational wave detector – it is building the prototype telescope to evaluate the stray light characteristics of the proposed eLISA telescope design.

Hard yards
“People come to us for the hard things,” said engineering director Smith. “We have real strengths to come up with new creative systems.” For its first customer Northrop Grumman, that meant a 1.5 meter mirror with an off-axis, convex aspheric surface. “That illustrates our strength in metrology -- fabrication of difficult-to-produce items.”

Another AOS area of expertise is advanced materials – for example using silicon carbide to make a 1.5 meter primary for a telescope – and for the co-founders it seems that the transition from academic lab to commercial enterprise has been comfortable.

“Getting started was smooth,” Valente recalls. “Since we had been at the University of Arizona, it wasn’t as scary as you’d think. We had people lined up and waiting.”

The company began small. Smith said: “We started with just Jim (Burge), Marty and I, and a polisher machine, in many pieces, that we rented. We had to build a 25 foot optical test tower quickly. No one else in the world could do this. At the end of the year, all the equipment was running.”

Fundamentally, what AOS does is combine super-sized optics with precision engineering, as that first project ably demonstrated.

At any spot on the surface of the 1.5 meter Northrop Grumman mirror, the difference between the theoretically “perfect” shape and the actual optic that AOS produced was no more than 5 nanometers – equivalent to just a few atomic layers. That’s precision.