UK-headquartered imaging sensor maker e2v technologies is to acquire the Spanish company Anafocus, in a deal worth up to €34.2 million.

The firm, which is based in Seville, designs and develops high-performance CMOS image sensors and vision systems. Like many of e2v’s existing products, they are used in a variety of industrial, scientific, medical and surveillance applications.

Once the deal is completed, Anafocus will become part of e2v’s machine vision business unit, which is itself part of the UK firm’s high-performance imaging division. Sales by that division are said to have grown by 26 per cent in 2013 (to £81.1 million), while Anafocus posted a small profit on sales of €5.6 million last year.

e2v says that as well as providing a boost to its imaging sensor sales, the acquisition will help to accelerate its own CMOS development roadmap for professional imaging technology.

“Anafocus' custom sensor design capabilities, expertise in 'vision system-on-a-chip development', and growing portfolio of products complements e2v's established position in machine vision markets,” it announced in a statement to the London Stock Exchange. e2v quotes figures predicting that machine vision markets will grow by around 10 per cent each year through 2018.

And while the acquisition price might initially look like a significant premium on the Spanish company’s 2013 sales figures, e2v says that Anafocus is likely to double its revenues this year, to around €11 million.

“The strength of the Anafocus team, and the e2v worldwide sales and customer support channels they can now access, will help us to accelerate our opportunities in this fast-growing business,” he added.

e2v told optics.org that it would be retaining the “AnaFocus” brand, and that all operations would remain at the company’s existing site following the expected completion of the deal in September.

The company is financing the acquisition partly with cash provided by a new £90 million credit facility. The initial price of €29.2 million comprises €26.5 million in cash, plus an assumed net debt of €2.7 million.

In addition to that the Anafocus management team, which is staying with the business post-acquisition, stands to earn up to €5 million in cash if it hits certain integration targets including sales growth.

In its interim statement last month, e2v said that it remained on track to hit its targets for the first half of its financial year, which ends on September 30. That is despite its “cautious” view of the market and the adverse impact of the strong pound – which effectively makes its products more expensive for foreign buyers. 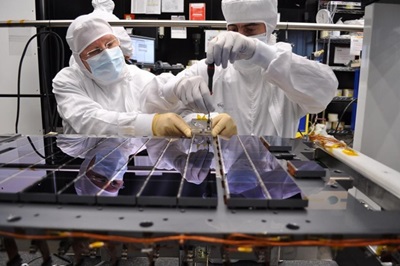 “Our order book reduced slightly in the quarter and we have some specific project orders to secure for our space and defence activities to support our anticipated growth,” announced the company, which posted a pre-tax profit of £33.1 million on total sales of £217.7 million in the year ending March 31, 2014.

One of e2v's highest-profile projects was to provide the huge CCD image sensor used by the European Space Agency's "Gaia" mission to map a billion stars. Last week, the ESA announced that Gaia was ready to begin collecting data following its December 2013 launch and some teething problems with its optics.