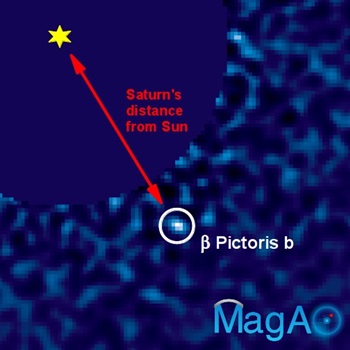 Traditionally, exoplanet detection has been the preserve of space telescopes, capturing images from above the turbulence of the Earth’s atmosphere. Foremost among those is the Kepler space telescope, and according to exoplanets.eu, to date (August 11) some 1815 have been catalogued.

Following its planned 2018 launch, the James Webb Space Telescope (JWST) is expected to add enormously to exoplanet detection capability – even though such observations were not originally anticipated as an application for the successor to Hubble.

But now, thanks largely to the development of adaptive optics, terrestrial telescopes are starting to make a contribution to the field of exoplanet detection as well. And two state-of-the-art optical technology systems in particular are helping astronomers in their quest to detect and directly observe these distant worlds.

The MagAO is an adaptive optics (AO) system installed on the 6.5 meter Magellan Clay Telescope, at Las Campanas Observatory (LCO), Chile, that corrects for the effects of atmospheric turbulence.

As Jared Males, NASA Sagan Fellow at the Steward Observatory, University of Arizona, explains, turbulence in the atmosphere is what causes the familiar twinkling of stars, and causes astronomical images of the sky to be blurry or have low resolution compared to what could be achieved with such a large telescope.

"MagAO measures the turbulence, and then removes it with a deformable mirror, allowing us to make the sharpest images ever made, and to see faint planets next to their stars," says Males. 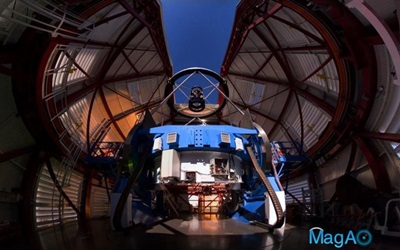 Pyramid sensor
The two key technologies used in MagAO are a pyramid wavefront sensor (PWFS) and an adaptive secondary mirror (ASM). The PWFS uses a pyramid-shaped prism to measure the wavefront, which Males says has several advantages over Shack-Hartmann designs.

"One of the biggest is that the PWFS has a very large dynamic range, meaning we can work on very bright stars, including Sirius, and very faint stars by simply changing the binning on the CCD camera in the PWFS. Other WFS designs need to change optics to do this," he explains.

The MagAO team also uses a CCD AO science camera dubbed 'VisAO.' According to Males, the VisAO is a fairly typical astronomical CCD camera, but the combination of the MagAO with VisAO complements the excellent turbulence correction provided by MagAO with the “amazing seeing conditions” at LCO. It also allows astronomers to use AO at visible wavelengths for the first time on such a large telescope.

"Other AO systems on larger telescopes have worked very well in the infrared, but have had to employ tricks such as ‘lucky imaging’ to work in the visible,” Males said. “MagAO+VisAO delivers the same type of performance in the visible as previous systems have in the infrared.”

The team's first exoplanet 'result' was the detection of beta Pictoris b, a planet roughly ten times more massive than Jupiter, and which orbits its star at about the same distance as Saturn does from the sun.

MagAO+VisAO was used to image this planet at a wavelength of 980 nm and, although Males points out this wavelength of light isn't visible to the human eye, he stresses that this was the first image of an exoplanet using a CCD - all previous images of exoplanets have been made using specialist IR detectors.

"We were only able to image the planet because of our PWFS and ASM. The planet was at just half an arcsecond from the star, and was 160,000 times fainter. Atmospheric turbulence means that such detection would be impossible without the superb correction of the turbulence provided by MagAO," he said. 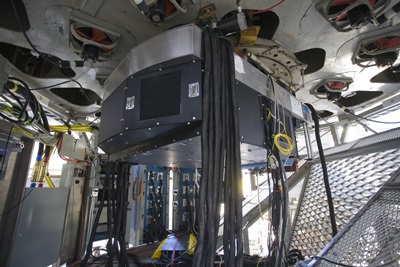 Lenslet array at Palomar
Elsewhere, the PALM-3000 is a second-generation AO shared facility instrument for the 5.1 meter Hale telescope at Palomar Observatory in California. PALM-3000 uses starlight to measure and correct turbulence-induced wavefront errors, and astronomers using the instrument can also choose from five state-of-the-art scientific cameras to image the corrected field.

According to Rick Burruss, a scientist at the Jet Propulsion Laboratory, California Institute of Technology, the instrument is specifically engineered for high-contrast imaging and spectroscopy of brown dwarfs, large planetary mass bodies, and disk material around bright stars.

"PALM-3000 supports faint guide-star use and has been used by scientists at Palomar to investigate the Kepler exoplanet candidate field, where target stars are typically in the 10-18 mv range. It has also been used to image faint Solar System bodies," he said.

This adaptive system uses a Shack-Hartmann wavefront sensor featuring three different pupil-sampling modes, each selectable via a 'lenslet' array exchanger. The sampling mode chosen depends on the target brightness. The finest pupil-sampling mode, with 64 sub-apertures across the pupil and projecting to 8 cm over Hale’s 5.1 meter primary mirror, produces the best correction -but also requires brighter targets.

The Shack-Hartmann detector is based around a high-speed CCD, allowing selectable readout rates from 30Hz to 2000Hz. According to Burruss, the flexibility of variable pupil-sampling and camera rate allows performance optimization on guide stars spanning more than 18 magnitudes of brightness. 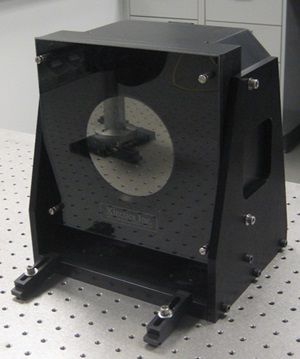 The HODM is the largest format astronomical deformable mirror to date. The actuators are made of 'electrostrictive' lead magnesium niobate (PMN), and are spaced 1.8 mm apart on center, with 0.15 mm gaps between each actuator, and a 0.2 mm thick polished-glass facesheet attached to the actuators.

Astronomers specializing in exoplanet detection and characterization have used PALM-3000 in tandem with two high-contrast instruments capable of suppressing bright starlight – known as P1640 and Pharo.

P1640 is a high-contrast speckle-suppressing coronagraph used to help obtain images and spectra of four exoplanets orbiting the star HR8799. It employs an apodized pupil-mask, a calibration interferometer, an integral-field spectrograph, and novel speckle-suppressing techniques.

A vector-vortex coronagraph has also been used in the Pharo instrument to image exoplanet candidates and disk material.

"The addition of the densely sampled HODM and the matched fine-pupil sampling mode improves the high-contrast performance over the first-generation PalAO instrument at Palomar by focusing more of the bright starlight behind the coronagraph in-use," said Burruss. 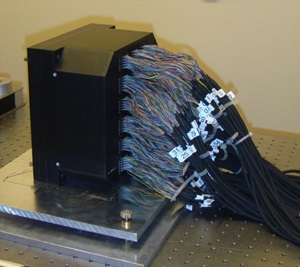 “As a result, the surrounding star-field is left darker, and exoplanets and disk material around the bright star are more likely to appear in the images.”

With AO-enhanced telescopes like Palomar the Magellan now delivering results, the hunt for exoplanets can continue apace. But as Males and the Magellan team reported at SPIE's recent Astronomical Telescopes and Instrumentation conference in Montreal, Canada, the technology does have its limits.

While it seems that terrestrial imaging of truly Earth-like exoplanets in the so-called habitable zone (HZ) is likely out of reach, they believe that the coming generation of giant telescopes will be able to locate and characterize many of the larger planets in the HZs of nearby stars.