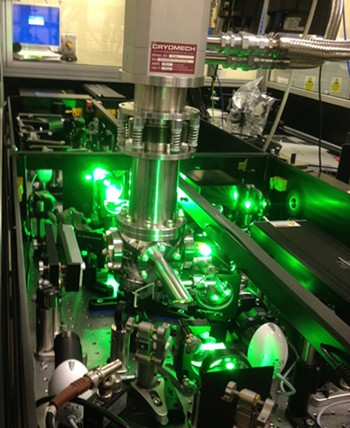 Set-up at Rutherford Appleton Laboratories in the Artemis laser facility.

Researchers from the University of Leicester, UK, say they have extended understanding of how nanosystems function, and that they are unlocking the potential to create new materials using nano-scale “building blocks”.

The study, which was last week published in Physical Review Letters, is based on a novel laser technique to examine the structure and internal atomic motion of a small cluster containing an acetylene molecule and a single helium atom.

The laser excites single clusters and generates rotational wavepackets, composed of multiple waves illustrating the individual motion of atoms. The team has tracked the wavepackets in real time for up to one nanosecond covering many rotations. The experiment was undertaken at Rutherford Appleton Laboratories in the Artemis laser facility using an advanced femtosecond laser system to resolve rotations of complexes.

The wavepacket approach provides greater detail of the structure and behavior of clusters than traditional spectroscopic techniques, improving understanding of small systems and allowing for the creation of new artificial materials.

Galinis said, “We used a combination of laser beams to excite rotations in small clusters comprising a molecule and a helium atom. We have found that the helium atom rotates and vibrates almost freely, occupying nearly the entire volume within the cluster. Hence, the cluster does not have a rigid structure: it behaves rather like a liquid. 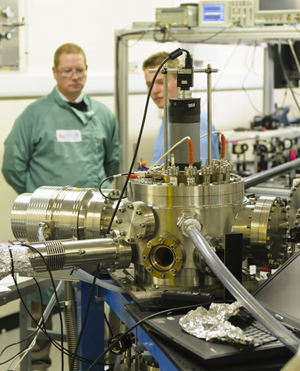 Vacuum apparatus where rotations of complexes were measured.

“We believe that the extension of this technique to other complex systems, in which weak interactions take place, is possible. The approach may also have the potential for exploring liquids, such as superfluid helium, in which the binding forces are similarly sensitive.”

Using the wavepacket technique, the research team from the University of Leicester’s Department of Physics & Astronomy have successfully controlled the rotation and vibration of an acetylene molecule and single helium atom complex without destroying it. Gediminas believes the same method could be applied to other types of cluster.

Dr Klaus von Haeften, Reader in Nanoscience at Leicester, who supervised the research, said, “This achievement was enabled through the collaboration of an international team of researchers from six different European institutions. The research is enhancing our fundamental knowledge of nanoscale systems and it can now take many different directions in the fields of physics and chemistry.

”Ultimately, the knowledge gained through our work will enable the design of novel materials based on nanoscale building blocks. These materials may show entirely new physical properties or catalyze chemical reactions that were otherwise impossible. This knowledge is important in enhancing our fundamental understanding of physical principles but also for applications of nanostructures in chemistry.”