Researchers using UK’s Vulcan laser to investigate most energetic events in the Universe. 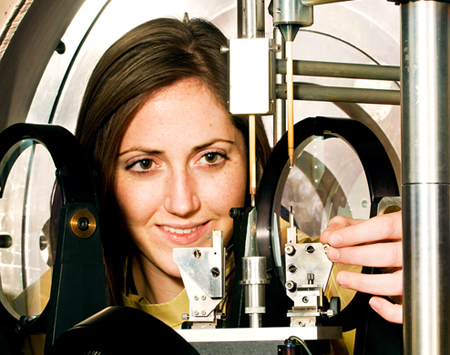 Supernova explosions, triggered when the fuel within a star reignites or its core collapses, create a shock wave that sweeps through several light years of space in just a few hundred years. But not all such explosions are alike and some, such as Cassiopeia A, which is 11,000 light years from the Earth, show “puzzling irregular shapes”, according to researchers.

To recreate a supernova explosion in the laboratory an international team, led by scientists from the University of Oxford, used the Vulcan laser facility at the Science and Technology Facilities Council’s Rutherford Appleton Laboratory to investigate what might cause these peculiar shapes.

The team focused three laser beams onto a carbon rod target, a few microns thick, in a low density gas-filled chamber. The enormous amount of heat generated by the laser – more than a few million degrees Celsius – caused the rod to explode, creating a blast that expanded out through the low density gas.

Rob Clarke leads the Experimental Science group at STFC’s Central Laser Facility. He commented, “The Oxford experiment is a great demonstration of the use of high power lasers for studying such astrophysical phenomena. Our laser, engineering and scientific staff are used to designing highly complex experiments which enable us to perform experiments at these extreme conditions within the laboratory.”

In the experiments the dense gas clumps or gas clouds that surround an exploding star were simulated by introducing a plastic grid to disturb and introduce turbulence into the expanding blast wave.

”The experiment demonstrated that as the blast of the explosion passes through the grid it becomes irregular and turbulent, just like the images from Cassiopeia,” said the University of Oxford’s Professor Gianluca Gregori, who led the study. A report of the research, entitled Turbulent amplification of magnetic fields in laboratory laser-produced shock waves’, was this week published in Nature Physics, June 1, 2014.

Funding for this research was provided by the European Research Council, STFC, and the US Department of Energy through the Innovative and Novel Computational Impact on Theory and Experiment (INCITE) program.