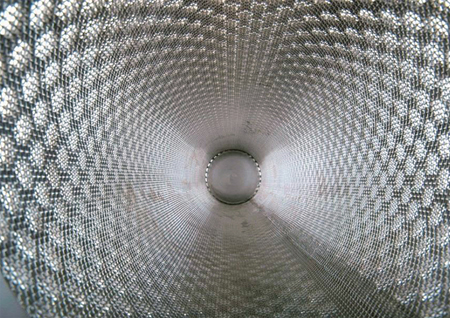 LAM means less energy is needed to pump fluid though a filter.

Laser additive manufacturing (LAM) is transforming the development and production of metal and polymer-based products as diverse as helicopter engine components, replacement hip and knee joints and industrial filters.

The technique is also enabling manufacturers to achieve solid designs of items that could not be made by conventional materials processing techniques. Several interesting examples of LAM in practice were presented at the Metal Additive Manufacturing conference hosted by the UK’s Association of Industrial Laser Users in Sheffield, earlier this month.

The presentations, which covered techniques, problem-solving and commercialization, included those by Neil Burns, co-founder of filter manufacturer Croft Filters, Warrington, UK, talking on industrial exploitation of AM, and Stéphane Abed, CEO of Poly-Shape, who travelled form the south of France to speak about Commercial exploitation of AM through technical development”.

Burns told the conference, “All my working life at Croft customers have been demanding the ideal combination of more open areas in a filter to speed up filtration but with more strength. You cannot have both, I’m afraid – more material gives strength but it creates greater resistance. 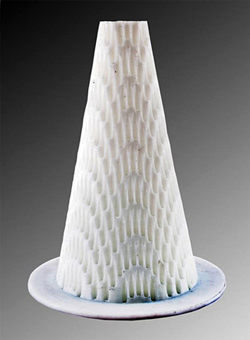 Aligning the holes in the filters makes them work better.

“In our research, we found that if we align the filter holes the filters work better. A few years ago I was on a training day in Manchester and saw a LAM machine and realized its potential. We could create a filter easily, reduce the material needed to make it and improve the flow through it by aligning the holes. It was the possible to align the holes, print them in plastic, test them and make them from different materials. Early tests showed fantastic results.”

“Consequently, we were able to lower the amount of energy required to pump the fluid though a filter. So we were achieving cost savings for both ourselves and customers. So we invested in an AM machine – a Realizer model 250 – and created a new spin-off business called Croft Additive Manufacturing. We are now running it on stainless steel 316. LAM gave us new opportunities for filter design, improving the filter process and now we are also making products for beyond the filter sector.”

So what about any problems and challenges posed by LAM for Croft Filters?

Burns said that for him the issue was not so much “dirty secrets” – the technical challenges of LAM described in an earlier presentation by the TSB’s Robin Wilson – but convincing customers that such products are reliable and actually better can still be an issue. “There are still many barriers – but we will get there eventually. For example, our filter disc is an example of an improved design of a conventionally manufactured filter disc. It is actually improved by LAM because there is no need for recesses so it is easier to clean.” 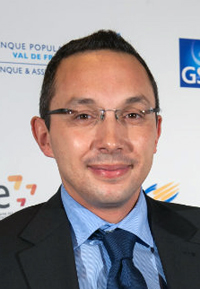 Stéphane Abed, CEO of Poly-Shape, based in Salon de Provence, France, then told the conference that additive manufacturing is no longer limited to prototyping applications, but at his company it is now producing a range of functional metal and polymer-based parts, typically for the aerospace and medical industries.

“With our approach to materials processing, which is called Selective Laser Melting (SLM), we manufacture parts such as for aerospace, helicopters or for satellite solar panels, using standard metal powders layer-by-layer from 3D-CAD data, “ he said. “First a powder layer is spread out onto the building platform of the SLM machine. Then a laser beam selectively melts the powder and so solidifies one layer of the piece to be made. Then the platform is lowered and the process starts again until the part is completely built up. The initial powder is completely melted and the density of the final part reaches 100%.”

“Mechanical properties such as tensile strength and hardness of our finished products match the original material’s specifications. A wide variety of materials can be processed, ranging from light alloys via steels to super-alloys. Poly-Shape has already optimized and qualified standard industrial materials such as titanium alloys, aluminum, tool steels, stainless steel and nickel-based alloys. Further suitable materials are continually being developed and qualified providing competitive benefits to our customers.”

Poly-Shape, founded in 2007, has installed one of the most efficient additive manufacturing machines in the world . Made by German company Concept Laser, it is currently available only in two companies in Europe, the second being at German carmaker Daimler.

Abed added that Poly-Shape now manufactures functional metal parts for major clients such as Renault, Thales and Safran. “These companies are now at the stage of qualification of parts we have made by this process. At the moment, we produce a few thousand items per year, with plans for further expansion of our range of five AM machines.”

After more than seven years of laser additive manufacturing experience, Abed has found that the most important aspect of LAM lies in the tremendous opportunity it offers for designing differently. 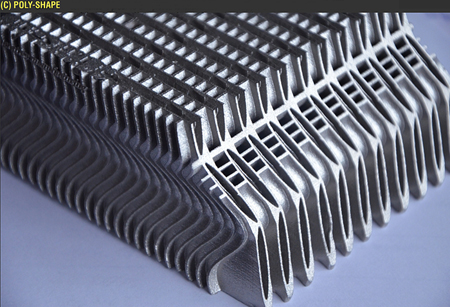 “The freedom of the designer is immense. We can imagine very complex parts, including hidden components that would be either totally unfeasible by conventional machining or cost-prohibitive. And a significant result is that our parts can be as strong or stronger but two to three times lighter than those conventionally manufactured.”

Pressed about whether LAM was all positives, Abed conceded, “Some problems are well known to the experienced players. The major problem is productivity and the technique’s current inability to mass-produce. For some smaller parts, it is possible to achieve production of the order of ten thousand units per year but less for larger items. This can limit the choice of client sectors. Another difficulty lies in quality control of manufacturing, which requires radically different technologies. The X-ray inspection, used for conventional castings , is not enough; so we must use positron inspection for some parts which is extremely costly.”

Considering the evolution of this technology, Abed said there are many ways to improve the productivity of LAM machines. “Developers are working on automating the processes, using more powerful lasers and increasing the size of the trays on which pieces are made. The Concept Laser machine that we just installed has an extremely powerful laser source (1kW compared with the typical systems that deliver hundreds of watts ) and with a larger workpiece area (640x400x500 mm compared with the usual 250x250x300mm) . This means that we can create much larger pieces or, above all, a greater number of smaller parts by LAM.”

Abed was asked whether the new parts, which are lighter, stronger and use less material, actually work out more economical in production. He replied, “We have some cases where we can show a cost reduction, such as with the satellite parts because we are integrating what was 25 different parts into one LAM. And sometimes the cost of production is actually higher but there is an overall product cost reduction. Also we have to consider the added value of such parts – such as the cost advantage of a lower weight satellite when it comes to launching and maintaining it.