Key milestone in the establishment of a 'CERN for laser research' in eastern Europe. 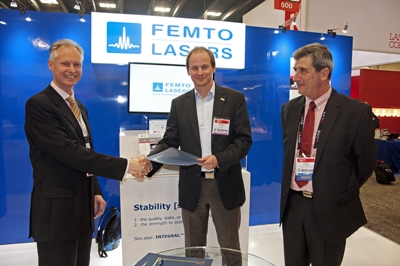 by Mike Hatcher
Last week’s Photonics West exhibition witnessed an early milestone in the billion-dollar Extreme Light Infrastructure (ELI) project, with the ceremonial signing of a contract for Femtolasers to supply a critical seed laser for a petawatt beamline.

Co-signing the agreement at the Austrian firm’s booth were senior representatives of ELI and Lawrence Livermore National Laboratory (LLNL), which will integrate the ultrafast pulse seed oscillator and other units in a dual chirped pulse amplifier system.

That system is scheduled to ship from LLNL to the ELI site in Prague in 2016, with “first light” of the facility's third beamline expected sometime in 2018, said Constantin Haefner, project manager of the high repetition rate advanced petawatt laser system (HAPLS) project at the Californian lab.

Once completed, ELI should become home to a collection of the world’s most powerful and advanced lasers, allowing international scientific research in areas as diverse as medical imaging, particle acceleration, biophysics, chemistry and quantum physics.

"ELI will become the first international laser research facility, much like a 'CERN for laser research,' hosting some of the world's most powerful lasers enabling a new era of unique research opportunities for users from all countries," said Wolfgang Sandner, director general of the ELI-Delivery Consortium International Association (AIBSL).

Haefner was joined by Femtolasers CEO Andreas Stingl and ELI Beamlines technical director Bruno Le Garrec for the ceremonial signing. Le Garrec said that the “Integral Element Pro 500” Femtolasers source would seed the “L-3” laser line in Prague, one of four lines in total set to be constructed at the site. The Prague facility is one of three “pillars” that form the wider ELI project, with others set to be built in Hungary and Romania at a later date.

Petawatt pulse stream
Once transferred from LLNL and ramped to its full performance, the line should be able to deliver a stream of petawatt pulses at a repetition rate of 10 Hz.

“This is a major step forward in the construction of this laser system,” Haefner said. The high-repetition-rate source will allow what he described as “high-fidelity” experiments with ultrashort, high-energy pulses of light. HAPLS promises to deliver 30 Joule pulses lasting just 30 femtoseconds.

The contract with Femtolasers was officially signed in late 2013, and work has in fact already begun on the construction of the cutting-edge light source. An optical system combining the seed oscillator with a multipass amplifier and other key elements is scheduled to be delivered to LLNL by August 2014.

Following acceptance tests, the rest of the amplifier system, which will be used to stretch and compress pulses, will then be commissioned. The two key parts of the beamline will then be put together at LLNL, before the whole thing is shipped to Prague and rebuilt.

Haefner told optics.org that with all of the individual technological elements having been demonstrated previously, the toughest part of the project will be to integrate the system in a configuration suitable for a user facility.

Milestone agreement
Le Garrec, who described the Femtolasers tender as the “first milestone for the whole of the ELI project”, emphasized that the four planned beamlines in Prague will represent just the start of wider effort. Plans to build similarly large light sources with different characteristics are already under way in Hungary and Romania, while a fourth “pillar” project could yet materialize.

He remarked that the ELI project would also be a boon for multiple innovative photonics SMEs, for example Photonics Industries, which provides the pump laser for the Femtolasers seed.

Stingl also highlighted that the deal would see Austria playing out its traditional role in connecting the East and West, and that it would be integrating components from partners in the US, Hungary and Germany.

“We are looking forward to delivering a unique ultrafast amplifier system to ELI, one of the most prestigious high-power laser projects to date, and collaborating closely with LLNL, one of the most distinguished laser labs worldwide,” he added.