Photonics21's Young Ambassador reports on groundbreaking research and outreach activity at the Institute of Photonic Sciences.

At 8.30 each morning ICFOnians gather at Plaça d’Espanya as if it were Harry Potter’s platform 9 ¾, waiting for the ICFObus to deliver them to the ICFO institute at nine o’ clock sharp. Inside, the sleekly designed and color-coded corridors, glass and light spaces, high-tech labs and impressive organization create the sense of a researcher Valhalla.

The highly international atmosphere – more than 50 nationalities are represented among the ICFOnians, with both Catalonians and Spanish permanently outnumbered - further adds to the feeling of somewhere outside of the ordinary.

In that time, a well-run and modern institute has emerged: at ICFO, one can’t escape the feeling that someone has put a significant amount of thought and effort into accommodating scientists to the maximum.

Funding maintained in tough times
So, why build an institute for photonics in Barcelona? It seems that the inception was triggered - at least in part - by favorable political circumstances. Around the turn of the 21st century there was a wider-felt need for more research-focused institutes in Catalonia.

As such, Andreu Mas-Colell, the minister of universities, research and the information society at the time and previously a professor of economics at Berkeley and Harvard, implemented a framework for research programs called ICREA (Institució Catalana de Recerca i Estudis Avançats) to promote research in the region.

Founded in parallel with ICFO were several other research institutes, focused on genomics, chemistry, telecom, nanotechnology and more. If this is the result, then I petition for more professors in government!

And although the cash-strapped Spanish authorities cut science spending by 39 per cent between 2009 and 2013, the regional Catalonian government has maintained its funding of ICFO. It is an attractive investment: approximately 70 per cent of the ICFO budget comes from external sources.

ICFO’s charismatic director Lluis Torner and group leaders do a great job in securing funding, and it seems that the recession was hardly visible at ICFO. Rather the opposite, in fact. With the help of the biggest private donation ever made for science in Spain – €18 million from the Cellex foundation – the institute was able to add the third and final element of its building in 2012. A fraction of the money was also used to create the “NEST” program to fund young researchers at ICFO.

One of the major advantages at ICFO, according to researchers, is that it unites most areas of the science of light under a single roof, with activity there ranging from highly applied technologies to basic photonics research.

During a “speed-dating” event – 20 minutes spent with each of nine research groups – I had a chance to glimpse the breadth of this effort. Ranging from research on plasmon nano-optics in the group of Romain Quidant to single-molecule biophotonics in the group of Maria Garcia-Parajo, from high-energy physics in the group of Jens Biegert to an industrial lab sponsored by Corning and linked to Valerio Pruneri’s optoelectronics group, I was rushed from one corner of the building to the next.

To my great regret the finer points of all this research will remain hidden until a longer visit in the future. However, it was clear that such diversity leads to an interesting cross-fertilization of ideas and forms a great stimulus for “inter-disciplinary” collaboration. 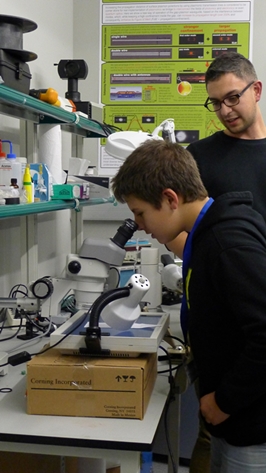 Outreach: a moral obligation
At ICFO, outreach activities are seen as a moral obligation to help justify the use of taxpayers’ money. Whether this idea stems from its director, the Catalonian government or from a wider sense of idealism and responsibility is hard to ascertain.

Nonetheless, it has clearly become an institutional policy: independently, all senior members of the administration reiterated the importance of explaining the science of light to non-scientists.

As such, the institute organizes a diverse range of outreach programs. Managed as a part of ICFO’s Knowledge and Technology Transfer (KTT) unit, this spans open days and laboratory tours, a video competition with regional celebrities (“illuminating curiosity”) and ICFO-produced books for children about the science of light.

One idea that struck me as particularly inspiring is “Llum en les Ones” (“Light on the Waves”). High-school students are challenged to submit a poem, song lyric or story about light, before the best contributions are set to music by professional groups.

The winning pieces are then performed in a celebratory event and recorded onto a CD. Such a competition appears to be a great way to match the beauty of light, and to connect science with art. It shows light’s omnipresence, and just how much it is entwined with our daily life. Above all: it is fun!

ICFO is also part of “European Centers for Outreach in Photonics” (ECOP). During my visit this collaboration of eight European photonics institutes had just established “GoPhoton!”, a European Union-funded two-year program aimed at raising awareness of photonics in wider society.

One of the main advantages of ECOP is the possibility of sharing ideas about outreach activities, and many initiatives will be translated between the participants. Then in 2015, nicely synchronized with the International Year of Light, major outreach events will be organized at each of the participating institutes.

The events will be distributed throughout the year to build upon shared experience, create year-round cohesion, and to ensure that they coincide with a “festival of light” in the respective cities - an idea that I could see gaining further traction.

The "ICFOseum"
Furthering the trend of using the term “ICFO” as a pre-fix, the institute also houses the “ICFOseum” – a few rooms with experiments demonstrating some basic features of light, and one room dedicated to the inventions dubbed “Made@ICFO”. 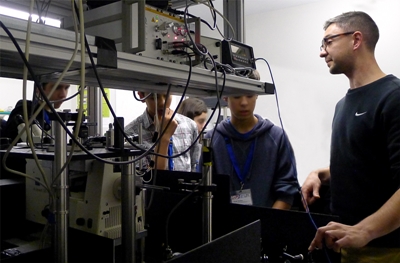 Hands-on outreach at the "ICFOseum"

I had the pleasure of participating in a tour around the ICFOseum and a lab visit with a group of 13-year-old students. These tours are conducted by ICFO’s own PhD students, who are obliged to do eight hours of outreach activities as part of their degree.

It really is great to see the reactions of the younger students to basic experiments, and to be subjected to their often insightful questions. It also becomes apparent that many PhD students share the feeling that outreach is fun: there are more applications than outreach hours to be filled.

In general, the PhD student body at ICFO is very active. Their OSA/SPIE/EPS chapter, known as the “ICFO Organization and Network of Students” (ICONS), is among the oldest European OSA chapters.

In fact, back in January 2007 it was at ICFO that the very first International OSA Network of Students (IONS) conference took place– sparking the IONS project. The chapter seems to work in such synergy with the ICFO KTT unit that it is hard for an outsider to distinguish these initiatives from those of the students and the ICFO administration.

Overall, the mixture of joint outreach projects, social events and professional development sessions are a very potent mix for both the students and the organization itself.

Jana Sanne Huisman is the Photonics21 Young Ambassador for Photonics Education and an Observer on the Board of Young Advisors to the Digital Agenda for Europe.