Rofin up strongly on better margins and bright outlook

Industrial laser firm says further reduction in the cost of its fiber lasers will see it post much higher profits in 2015. 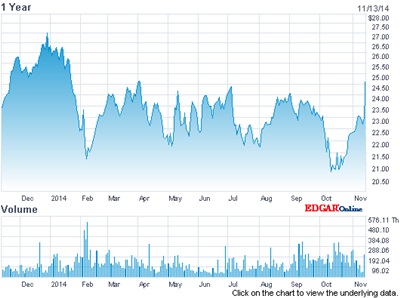 The share price of Rofin-Sinar has risen more than 10 per cent in value following a strong finish to the industrial laser firm’s latest financial year and expectations of much higher profits in 2015.

Although the Nasdaq-listed company reported a slight year-on-year decrease in sales to $146 million in its latest fiscal quarter, its net income of nearly $12 million was up by one-fifth.

CEO Günther Braun said: “We delivered excellent financial performance in our fiscal fourth quarter as many of our initiatives began to show results.”

Among those have been a long-standing plan to cut the cost of its high-power fiber lasers, by developing higher-power modules. More improvement is expected next year, as the company introduces a 2 kilowatt fiber laser engine based on 300 W diode modules and featuring internally fabricated laser chips.

“We are making excellent progress in the cost-efficient production of next-generation fiber lasers, which we will be introducing in calendar 2015,” he told investors, adding that the cost-cutting measures were enabling Rofin to compete much more effectively. “We are at the market price,” Braun assured an investor conference call.

“Clearly, our strategy is working, we are beginning to see the positive results of our research and development investments,” he added. With gross margins currently standing at 37 per cent, he is expecting to improve that figure to 40 per cent by this time next year.

“This was our strongest quarter in fiscal year 2014 for sales to the medical device and automotive industries, while sales to the machine tool, consumer electronics and semiconductor industries remained solid,” Braun said, pointing to a notable improvement in sales to China amid strong bookings for machine tool applications.

Targeting cutters
However, the results for the full fiscal year show what has been a tough period for the company, which has twin headquarters in Plymouth, Michigan, and Hamburg, Germany.

More encouragingly, Rofin’s order entry over the closing fiscal quarter of the year was 14 per cent higher than the same period in 2013, at $141.3 million. Braun said that the company received orders for around 90 high-power fiber laser units in the quarter, and would now be targeting larger OEM customers for cutting applications.

Those customers are increasingly looking for higher powers with which to cut through materials more quickly. Systems featuring up to 12 kW of fiber laser power were seen at the recent EuroBlech and Fabtech trade shows, although the more typical power levels are 6 kW and 8 kW.

Rofin’s plan is to introduce its 2 kW fiber laser modules early next year, and to use those in forthcoming 6 kW and 8 kW systems currently in development.

Unlike this time last year, Braun and his management team felt confident enough to set a sales outlook for fiscal 2015. They are predicting a 6 per cent increase in revenues to around $560 million – but a much more significant impact on the bottom line, where those improved margins should improve earnings-per-share by some 80 per cent.

“The improvement in results will be a direct result of growth in sales of the company’s next-generation products, including fiber lasers, and improved profitability from cost-reduction measures and production economies of scale,” declared Rofin in its financial statement.

And although there is no substantial backlog of orders relating to the new ultrafast laser process for brittle materials production initially developed by FiLaser and recently acquired by Rofin, Braun said that recent results with it had been impressive. “The future is bright,” the CEO concluded.