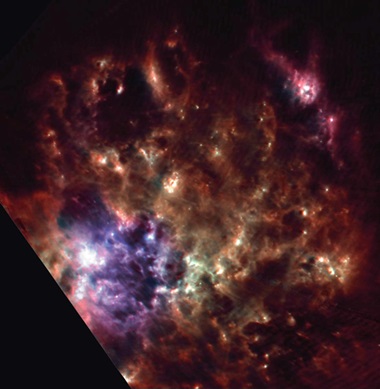 by Ford Burkhart
Despite a glitch or two, the AKARI space telescope succeeded as the first Japanese space mission totally dedicated to infrared astronomical observations.

Operating for five years until November 2011, it has also proved a learning experience for the Japan Aerospace Exploration Agency and its partners in Korea and Europe – with key lessons for a follow-up mission set to launch a decade from now.

AKARI’s assignment was an all-sky survey in the mid- to far-infrared wavelengths with a 68.5 cm aperture supercooled telescope based on an innovative silicon carbide 700 mm mirror.

At last week’s SPIE Optics and Photonics Symposium in San Diego Takashi Onaka from the Department of Astronomy at the University of Tokyo, an AKARI research team member, highlighted some of the lessons learned from AKARI that will apply to SPICA, a similar but much larger telescope that is scheduled for a 2023 launch.

Following the completion of AKARI, which means ‘light’ or ‘torch’ in Japanese, Onaka said that the key lesson was the need for more testing of the mirror’s support system.

AKARI was based on lightweight silicon carbide, which was a novel material for telescopes in the 1990s. “It was a special kind,” he said, “and had never been used for mirrors like this.”

The problem was that industrial partners could only produce relatively small mirrors at the time, Onaka said. “[They were] not as big as we needed. They said they could make it, but it was very difficult, and it took more than a year to get a real mirror blank at 700 mm.”

The mirror’s thickness was also a problem. “It was much thicker than they were used to producing,” Onaka said. “It took a long time to figure everything out, and we lost nearly a year.”

Another lesson was a need to generate more data on the telescope’s material properties at low temperatures. “That was lacking,” Onaka said. “We did not have a good model or simulation of what was going to happen. If we had sufficient information, we could have predicted what could happen. For the mirror support system, with better information on its properties, we would have had a slightly different design.”

Nevertheless, the AKARI mission has made many important observations related to supernovae, star formation and red-star giants – for example the discovery of carbon monoxide molecules in the young supernova remnant Cassiopeia A. The experience gained is already helping with the SPICA mission, which will feature a much larger 3.2 meter telescope cooled to below 6 Kelvin.

Standing for Space Infrared Telescope for Cosmology and Astrophysics, SPICA will again see cooperation with ESA, along with Korean and Taiwanese partners.

With a proposed launch date of 2023 and a projected lifetime of three years, it will focus on star- and planet-formation.