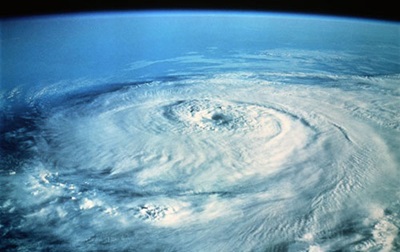 STORM: keeping an eye on the eye of the storm

by Ford Burkhart in San Diego
Forecasting of extreme weather is about to get much more detailed, and within just a few years it will be possible for anybody with a smart phone to receive high-precision storm warnings based on data collected just a minute earlier – thanks partly to photonics.

The availability of such current data should be one outcome from the forthcoming launch of a geostationary satellite positioned over equatorial Asia and featuring a hyperspectral imaging sounder.

By 2017, forecasts will be making use of that satellite data to vastly improve Asia’s storm warning systems. That’s according to Gail Bingham, chief scientist at Utah State University’s Space Dynamics Laboratory, who was speaking at the SPIE Optics and Photonics Symposium held at the San Diego Convention Center.

Addressing a plenary session on hyperspectral imaging and remote sensing, Bingham’s talk outlined a longer-term plan for six such satellites, spaced out around the world, to improve forecasting globally.

The AsiaSat 9 communications satellite, in a partnership with US-based start-up GeoMetWatch, will launch the new sensor, known as “STORM”, short for Sounding and Tracking Observatory for Regional Meteorology.

The sounder will be funded by partners including the US Export Import Bank, AsiaSat, GeoMetWatch and Utah State’s Advanced Weather Systems Foundation. The plan is for GeoMetWatch to eventually market the weather information that is collected by the satellite.

Problem forecasts
For centuries, tropical storms and typhoons in Asia have wreaked immense damage across a region that is inhabited by 70 percent of the world’s population. Heavy storms regularly cause flooding, and while good forecasting is crucial, even slight inaccuracies are a source of danger.

“Much of the problem is wrong forecasts,” said Bingham, who proposed the global satellite system as long ago as 1986 and helped design the STORM sensor. “Consider the significant cost of errors, the cost of preparing for something that doesn’t happen. People will stop paying attention.”

The new hyperspectral sounder will collect information by observing not just an image of the top of a storm, but by using data captured from deep within it and used to create a depth profile of the weather system.

“You will have the capability to look between the absorption lines in the atmosphere to find out at what level a particular photon came from,” Bingham explained.

“You will have capability to watch the development of severe weather,” he added. Showing video animations of instability in the atmosphere, as the STORM sensor picked up winds that could steer the cyclone, he predicted, “We’ll know exactly where it’s going to go.”

Up-to-the-minute data: for everybody
Deeper storm data will have a significant impact on air traffic routing, Bingham added. For example, if an airplane knows about the wind strength in 20 different layers of the atmosphere, it can fly at a level to minimize wind shear, or to ride the fastest tailwind.

Based on a Fourier transform spectrometer to yield high spectral resolution, STORM will track and analyze temperature and water vapor within a weather system.

Where STORM improves on previous imagers is that it will feature more than 1800 spectral channels, rather than the current 18 bands of information. “Thus we have a hyperspectrum, which means lots of detail in the weather forecasting,” said Bingham. “You can see lots of different profiles, and the signal to noise ratio is improved.”

The anticipated level of detail should reveal exactly what kind of severe storm event will occur in the coming five minutes, Bingham said.

The improved data will be crucial not only for aircraft but also for the military, shipping and ordinary people planning their day. “Everybody with a palm device can forecast the next five minutes,” Bingham predicted. “That was our goal 15 years ago, that any person with a device has his own information, just one minute old.”