The new technique could be valuable for time-lapse imaging of biological systems. 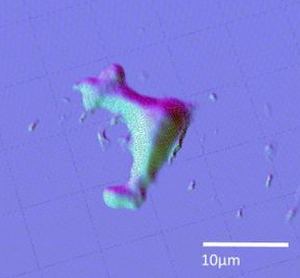 Cells at a glance

A lens-free imaging technique developed by CEA-Leti, the Grenoble-based institute that forms part of the French government's CEA research organization, allows live imaging of micron-scale objects across a wide field of view.

The new method should prove particularly valuable for examination of biological systems, visualizing cells, bacteria and viruses with sufficient clarity and resolution to allow researchers to distinguish readily between them.

This in turn could have a significant impact on the understanding of some fundamental aspects of cell behavior, according to the developers, who designed the platform to be both simple to use and cost-effective to deploy.

"At CEA-Leti we have been inventing a path for lens-free imaging to enter the realms of diagnostics and fundamental biology since 2009," commented Cédric Allier of CEA-Leti to optics.org. "At first we demonstrated the ability of lens-free imaging to detect single bacteria over a very large field of view; then the detection of single virus. Now we are extending our work to the live imaging of 2D and 3D cell cultures."

The latest version of the CEA-Leti system, unveiled at the end of June 2013, demonstrates two-micron resolution over a 24-square-millimeter field-of-view, as well as allowing time-lapse imaging of cell cultures over extended periods.

Thin wetting film
The technique developed at Grenoble builds on work underway at UCLA, where a group led by Aydogan Ozcan has made several high-profile breakthroughs in lens-free holographic microscopy.

"We use the same principle as the Ozcan work, observing the interference pattern produced by an object under coherent illumination rather than the object itself," said Allier. "This is fundamentally an old and established principle; Dennis Gábor won the Nobel Prize in Physics for work including holographic microscopy in 1971."

Today the CEA-Leti group focuses on the application of lens-free imaging to the monitoring of live mammalian cell cultures, while the Ozcan Group looks likely to focus on diagnostics applications and tele-medicine platforms for its technology.

Although the optical principle is well established, applying it to small biological structures posed some challenges. Normal mammalian cells are around 10 microns in size, and feature a cell nucleus which strongly diffracts light; but the interference produced by bacteria and viruses - perhaps 1 micron and 100 nm in size respectively - are much weaker, and thus harder to detect.

The solution involved the use of a thin wetting film, essentially creating liquid micro-lenses on top of each object and enhancing their contrast for detection. First developed by CEA-Leti in 2010, this approach initially allowed detection of single bacteria over square-millimeter areas, and was then honed to detect single viruses in collaboration with the Ozcan group. 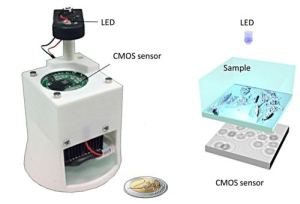 "Using a wetting film to create micro- or nano-lenses on top of micro-objects is a strong idea, but there were no applications for it apart from some use in the fabrication of optical fibers," commented Allier. "This use of the technique in combination with lens-free imaging is the first robust application, combining optics and fluidics at the nano- or micro-scale."

Now patented by CEA-Leti, the wetting-film approach is not just limited to lens-free applications, but could also extend the detection limits of conventional microscopes.

"Regular microscopy is very effective for observing phenomena at the cellular and sub-cellular level, but it misses the full picture where the environment predominates," said Allier.

To grasp this more dynamic situation, CEA-Leti is developing lens-free video microscopy, which could deliver a new range of capabilities and might yield more significant advances than just a further enhanced resolution.

The developers envisage lens-free video microscopy being used to monitor cell cultures directly in their incubators over very large fields-of-view, perhaps up to 44-square-millimeters, as well as over extended periods of times. This means that observers will be able to gather comprehensive data about the cells' spacial and temporal statistics - a large volume of data to be sure, but potentially of great value in understanding cell development.

Digital sensors
Another strand in the story is the availability of modern digital imaging sensors sensitive enough to yield worthwhile results.

When CEA-Leti started working on lens-free imaging, the resolution of typical sensors was poor, although still good enough to initiate some scientific work if the researcher was inventive; at the time, Allier dismounted his own web-cam and employed it for some of the initial trials.

"Five years ago it became clear to us that this method would soon become practical, with efficient CMOS sensors used in place of regular microscopy," he noted. "We anticipated that the development of lens-free imaging would parallel advances in CMOS sensors, which today can boast 1-micron pitch and 16 Megapixels resolution. What we did not anticipate are the kind of sensors now developed for devices such as the iPad, which are pushing the limits of size and resolution still further."