Report reviews the future of emerging technologies that are "driving change in the LED value chain". 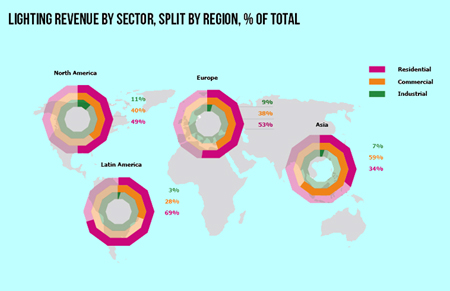 Memoori of the future: The report reviews the prospects for LEDs in buildings.

Market analyst Memoori Research has published a new report on the global market for LED lighting in buildings, bringing together market sizing data, investment data and all the factors that influence the industries future.

The company commented, "We predict that revenue from the global LED lighting market for buildings will rise from $9.5 bn in 2013 to a total of $25.4 bn by 2017. This would represent a compound annual growth rate (CAGR) in the overall market of 22%, over the five-year period."

The global shape of the LED lighting market will stay broadly the same over the next five years, with the EU, North America, Japan and China still taking up the largest proportion of LED revenues. Growth in India will be the highest at approximately 31% CAGR, but from a low base, and penetration rates will remain relative low. The rest of Asia (with the exception of Japan) will experience growth of around 24% due to positive legislation, new construction, and government incentives.

Many global lighting product sectors remain highly fragmented. This is likely to change over the next few years. Memoori predicts that the continued drive for improved lighting performance and lower costs should drive continued vertical integration in the market particularly downstream in the value chain.

With more building controls companies eyeing the market, and acquisitions of lighting controls companies by LED lamp and luminaire manufacturers likely to continue. The prospect of mega acquisition deals that further consolidate the market are also not off the table looking forward to 2017; be they for access to unique LED technology IP or for access to customer base and distribution channels.

At 186 pages with 53 charts and tables, The Business of LED Lighting in Buildings 2013 to 2017 report filters out important conclusions, supported with facts, as to what is shaping the future of the LED lighting industry. Interested parties can learn more at the report's website.