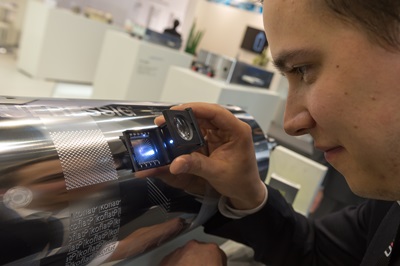 As the 2013 LASER World of Photonics event drew towards its close, organizers Messe München said that close to 27,000 visitors turned out to see a plethora of photonics technologies - with ultrafast and fiber lasers predictably prominent among the new releases.

Exactly how many different vendors of picosecond and femtosecond lasers the industrial sector really needs remains to be seen, but on this year’s evidence there’s unlikely to be a shortage of the sources any time soon.

Rofin-Sinar CEO Günther Braun, also chairman of the German Engineering Federation’s (VDMA’s) laser materials processing working group, certainly picked up on that trend: “This year there was particular interest in ultrashort pulse lasers and in fiber lasers but we also observed keen interest across all classic technologies,” he told the organizers.

Next generation
That wasn't a surprise, given that Rofin itself was partly responsible. The firm presented its future generation of 1.5 kW fiber laser modules (with a 6 kW prototype combining four of those modules via a 50 µm fiber said to be doing well in welding trials), and also showed off its “compact” 3 kW multimode fiber laser - specially developed for direct integration into existing machines. In the ultrafast regime, Rofin’s “StarFemto FX” made its debut in Hall C2.

Over in Hall C1, meanwhile, Trumpf was premiering no fewer than 13 products, including two femtosecond lasers – one aimed squarely at the company’s familiar territory of industrial applications, and a second representing the first appearance of its new scientific lasers division. Ultimately, Trumpf said, it is aiming to push the pulse power of the latter into the terawatt class while maintaining the tabletop footprint. 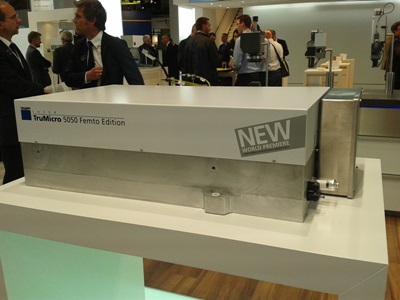 Trumpf has also upped the power of its picosecond lasers to 150 W, but reckons that the even shorter pulses offered by the “TruMicro5050” femto edition will soon be finding use in the production of nitinol components, medical implants and the more heat-sensitive biomaterials, where even picosecond pulses can generate a degree of undesirable melting.

High fiber
On the fiber laser front, one of the new products on the stand was the TruFiber 1 kW, flanked by new direct-diode sources offering between 300 W and 6 kW of power for applications where beam quality is less of an issue.

According to Trumpf’s Marco Holzer, who gave a presentation at a Hall C1 application panel session covering the technology, surface treatment applications are set to benefit from Trumpf’s 6 kW version, which comes with a spot size of around 2 mm and a beam quality of 60 mm*mrad.

In that session, Holzer's talk was preceded by a presentation from Stefan Heinemann, CTO of the LASER show debutant DirectPhotonics, who revealed some of the thinking behind the start-up company’s extremely compact but high-powered sources.

To do that while maintaining reasonable beam quality (Heinemann’s benchmark is less than 10 mm*mrad), the two critical elements underpinning the DirectPhotonics designs are dense spectral combining - currently of individual emitters with a wavelength separation of 4 nm – and a slow-axis combiner (SAC) array to merge the beams.

DirectPhotonics has already agreed a deal to supply an OEM customer with its 2 kW source, but Heinemann outlined the scope to ramp that power in a big way, saying that the next generation of products could feature diodes multiplexed with a spacing of only 1 nm.

Not to be outdone, the laser diode manufacturer Dilas showed off a compact new tailored bar unit capable of delivering 300 W but weighing only 300 grams and "Evolution", its 600 W diode source with a beam quality of 22 mm*mrad. Jenoptik said that it was aiming to reach the kilowatt mark with a system based on the high-brilliance and extremely efficient diodes that it has recently developed. 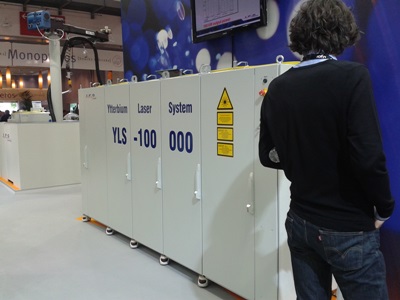 But for sheer power, it would be hard to out-muscle IPG Photonics. Aside from a selection of new pulsed ultraviolet and green sources (and a kilowatt-scale green laser housed in a green box) being previewed, the fiber laser firm also brought its walk-in-wardrobe-sized 100 kW laser to Munich – a commercial version having recently shipped to a customer in Japan.

Russia meets China in Germany
At China’s Han’s Laser stand, a more conventionally powered IPG source was being used to cut thin sheets of metal, and attracting a steady stream of visitors by bringing a strong feel of the sheet-metal production line to the trade-show floor.

Among the other firms with kilowatt-scale fiber lasers on view were Coherent with a 3 kW prototype and GSI Group subsidiary JK Lasers giving a taste of what to expect in the future with its 4 kW design.

Likely to gain more immediate commercial traction will be Coherent’s ultrafast lasers, including the latest addition to its in-house developed Talisker series. The company launched a new “HE” (high energy) version in Munich, offering 200 µJ pulses at the fundamental 1064 nm output, 120 µJ in the green and 40 µJ in the ultraviolet at 355 nm – and complementing the higher powers available from recent acquisition Lumera Laser.

Over on the Newport stand was another ultrashort-pulse source laser being aimed at industrial applications, in the form of the “Spirit” ps 1040-10. Its 13 picosecond pulses and flexible repetition rates can be configured to offer an average power of more than 10 W. Meanwhile, the latest “Carbide” laser from Lithuania’s Light Conversion, also aimed at industrial users, now offers 300 fs pulses and an average power of 4 W.

International flavor
While the LASER show isn’t just about the lasers these days, it does remain a dominant theme. There was further evidence of that at Messe München’s own exhibition of photos and products from earlier shows this year, with grainy images of Ted Maiman and co at the very first event, back in 1973. 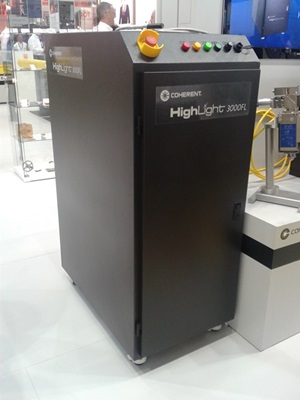 Things have obviously moved on a great deal. Jenoptik CEO Michael Mertin told the organizers that, aside from the evident growth of the trade show, its emphasis has shifted:

“[The show] has developed very considerably in terms of content too, towards the laser as a tool,” Mertin said. “Namely, towards the applications of laser technology - and less to do with the physical principles. That is critical nowadays because we see laser technology as a key technology of the 21st century. Nowadays, lasers enable production processes, which just a few years ago, decades ago at any event, were still borderline Utopia.”

Though undeniably a good thing, the growing acceptance of the laser as “just a tool” also has geographical implications.

Coming just a day after the Eurozone clocked up a sixth successive quarter of recession, Messe München highlighted that visitors from today's global industrial heartlands of China, Russia and Korea had proved crucial to maintaining attendee figures at the hoped-for levels.

And as the LASER event moves into its fifth decade, that is certain to prove a recurrent theme.