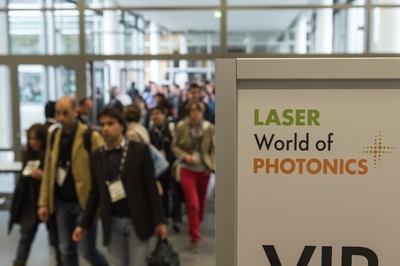 By Mike Hatcher in Munich
An application panel session on day two of the LASER World of Photonics trade show in Munich demonstrated the huge potential of biophotonics for early diagnosis of cancer and sepsis, but also the “Catch-22” problem facing therapeutic technologies – and photodynamic therapy in particular.

Surgeon Christian Betz from Munich’s University Hospital opened the session with news of positive developments in the detection of head and neck cancers using optical means.

He has been trialling a series of optical methods in a bid to improve early diagnosis of tumors and pre-cancerous tissue, and believes that a combination of screening, mapping and optical biopsy techniques offers what looks to be an effective diagnostic approach.

Betz has used auto-fluorescence to screen patients at risk of developing tumors, followed by optical coherence tomography (OCT) to map the dimensions of any lesions that are discovered, and then confocal laser endoscopy (CLE) to provide an optical biopsy of abnormal cells.

In small-scale clinical studies, 158 patients were assessed with both a conventional white-light endoscope and with auto-fluorescence. Results showed that more lesions were discovered by employing both types of visualization, with a very high sensitivity but relatively low specificity – for example tissue that was inflamed but otherwise normal yields a fluorescence signal.

Betz told attendees that he felt those results very promising, but that much larger studies would be needed to prove true effectiveness. Tests on CLE with a Mauna Kea Cellvizio tool are at a much earlier stage currently, but the surgeon showed high-definition videos of abnormal cells that clearly revealed the existence of tumors in the form of an optical biopsy.

More clinical evidence required
But despite that promise, there is a major problem facing biophotonics in these new areas of application – generating the stack of evidence required to convince clinicians, surgeons, pathologists and regulatory authorities of its genuine effectiveness.

Betz, admitting that his interest in biophotonics is rather unusual for a practising surgeon, said that the true evidence base, in terms of large-scale studies or meta-analyses of multi-center trials, was still weak.

“We need to publish [results of large clinical studies], but there is not much support for those studies,” he said, adding that to produce a meta-analysis that compared various biophotonics methods would be expensive because of the large number of tools that would need to be purchased.

And Betz highlighted an even more difficult problem facing developers of therapeutic biophotonics, and photodynamic therapy (PDT) in particular. “PDT is not widely accepted, because it does not fit the traditional way of thinking,” he said, explaining that the vast majority of his peers, when faced with an invasive tumor, is to simply remove it surgically.

PDT: early promise but major problems
Despite early promise shown by PDT a decade ago in the treatment of more than 1000 patients with either early-stage or advanced lung cancer, that frustrating theme was picked up by Dirk Hüttenberger from Apocare Pharma – one of the few pharmaceutical companies to be putting money into the development of PDT currently.

“PDT is not yet a serious topic in oncology,” Hüttenberger said, noting that over the past ten years only a handful of presentations on the topic have featured at major oncology meetings around the world.

While there are lots of single case studies and some small trials to have suggested the effectiveness of PDT, that has not yet been repeated on the kind of scale required to convince authorities or clinicians demanding a true evidence base.

“Surgeons say that surgery is 100 percent effective, while PDT doesn’t always work,” he added. A big part of the problem is the “Catch-22” scenario that has developed. Neither approving authorities nor contract researchers are used to dealing with the combination of both a drug and a laser, while the use of similar technology for what might be viewed as frivolous applications such as hair removal also presents a problem.

But perhaps most significant of all is that major pharmaceutical companies are simply not interested in making the kind of long-term and expensive investment necessary to produce the kind of large-scale trials (estimated cost: €120 million) needed to provide convincing evidence, because PDT is not the kind of “blockbuster” drug that they really want to develop and make money from.

Hüttenberger thinks that the answer could be to focus on a single application, but with the long list of difficulties facing PDT, it is hard to see things changing any time soon.

Raman opportunities
Where biophotonics does appear to have a much greater scope for clinical impact is in diagnostics – and not just for cancer. At the same application panel session, Karin Schütze from Germany’s CellTool highlighted a way to distinguish between different forms of Hodgkins lymphoma – something that could greatly improve individual treatment of the disease, while adding that the “fingerprint” nature of Raman spectroscopy had the potential to generate useful information about the contents of an entire cell.

CellTool’s “BioRam” system, developed to generate Raman spectra from cells mounted on a glass slide or dish, is “now ready for biomedical research and applications” said Schütze – and one hugely important area could be that of sepsis, or bacterial infection.

Studies have shown that deaths from sepsis doubled between 2000 and 2008. Though partly a result of the world’s ageing population, that figure also includes some six million newborns and children killed in the developing world.

As Michael Bauer from the Center for Sepsis Control and Care at Jena’s University Hospital puts it, there is a “desperate need” to identify the nature of dangerous bacteria as early as possible in order to treat patients with appropriate antibiotics. Any delay puts the patient at increased risk of death from an infection. Unfortunately the traditional diagnostic method – growing cell cultures in a petri dish – is distinctly “nineteenth century”.

Bauer highlighted Raman as one method that could offer a breakthrough, with the potential to identify bacteria in spinal fluid within just a couple of hours of a sample being taken.

With no need for staining of samples, Raman is also showing promise in place of traditional "pap smears" for the precancerous form of cervical cancer, as well as screening of oral lesions.

As far as meeting the “unmet needs” of clinicians goes, it seems that biophotonics has far more going for it in diagnostic use than in therapy.