Caltech start-up says that it is working with customers on mobile device applications. 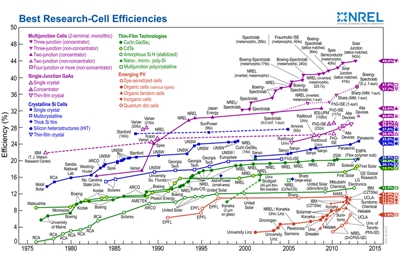 California-based solar cell developer Alta Devices has produced a dual-junction device with a conversion efficiency of 30.8% - a new world record for this type of cell when used without solar concentration.

Verified by the US National Renewable Energy Laboratory (NREL), the figure compares with other recent records of 44% for a triple-junction concentrator cell made by Solar Junction, 28.8% for Alta's similar single-junction device, and 18.7% for a CdTe-based cell made by First Solar.

Alta, which is targeting its lightweight and flexible technology at consumer devices, says that in some cases the cells can even provide enough energy to eliminate the need to plug the devices into the electric grid.

Multi-junction cells use additional layers of semiconductor material to turn more sunlight into useful electricity, and due to their higher cost are typically used in either space or concentrating PV (CPV) applications.

Under concentration, the dual-junction record stands at 32.6%, and was set by a research team from the Instituto de Energía Solar – Universidad Politécnica de Madrid (IES-UPM) in Spain back in 2008.

Consumer applications
Alta, which is working on GaAs-based cells using technology pioneered at Harry Atwater’s Caltech laboratory, says that its latest work directly translates into more electricity generated from a smaller surface area – and rather than being used in CPV systems the firm believes that it will instead find initial applications in consumer devices.

“Applying Alta’s highly efficient, very thin and flexible mobile power technology to consumer devices can extend the battery life of everyday products such as smartphones, tablets, keyboards, mice, remote controls, and more,” said the company in its announcement of the record figure.

“We are changing the way solar technology is used,” added CEO Chris Norris. “With our technology, enough energy can be generated from sunlight to effectively power devices in ways not previously possible. We are working with a number of customers who are designing their mobile products to increase battery life; and in some cases, we can provide enough energy to eliminate the need to plug into the electric grid.”

Alta has even created a calculator on its web site to help device manufacturers work out the extension to battery life that the cells could provide for a variety of consumer mobile devices.

According to the calculator, a typical outdoor worker could expect to boost their mobile phone battery life by 80% each day, while a student would be able to get over 60% more battery life for a tablet device. Alta says that the improvements can be achieved with minimal weight or size changes to the device designs.

38% target
Norris adds that Alta is far from done with its efficiency improvements, and the company has set a target of 38% for the dual-junction cells. That would still be less than the efficiency of triple-junction concentrator devices that are able to convert a greater proportion of the solar spectrum into electricity, but Alta’s thin and flexible materials are easier to make and should be cheaper to deploy in volume.

The new dual-junction technology builds on the GaAs semiconductor approach that had previously enabled Alta to reach 28.8% with a record-breaking single-junction device, adding a layer of InGaP material as the absorber on top of the base cell.

Alta is currently shipping its single-junction technology, and was last month named as one of the year’s 50 leading “disruptive” companies by the Massachusetts Institute of Technology’s Technology Review publication – a list that also included the CPV cell developer Semprius alongside industrial giants like Audi, Samsung and General Electric.