‘Non-lethal’ lasers not always as specified

Many supposedly low power laser-based tools, including some laser pointers, widely available over the Internet, are often incorrectly or under-specified.

In conjunction with widely varying international export and import restrictions, this can mean that that potentially dangerous laser systems can easily get into the wrong hands.

These were just some of the eye-catching observations of Massimo Annati, RAdm (ret), who is now director of the European Working Group on Non-Lethal Weapons (EWG-NLW), in his presentation to the tenth annual Directed Energy Systems conference, organized by Defence IQ and held in London earlier this month.

Annati’s talk was entitled “We Are Not Alone – Criminal and Malevolent use of Laser Dazzlers” and it described the increasing variety of non-lethal applications of lasers, which are being deployed by friend and foe alike. 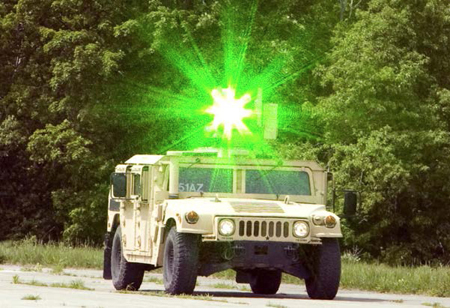 Military lasers are permitted to "hail and warn" but not to blind.

The Blinding Laser Weapons Convention states that “laser weapons specifically designed to cause permanent blindness to people are prohibited. However “dazzling lasers and anti-material lasers” are excluded by the scope of protocol, and therefore are allowed.

He added that non-voluntary blinding is acceptable under the protocol, if resulting from admissible activities – such as during operations against optical systems, when subjects are close to a material target, when using laser designators, and in certain other situations.

“My talk is called ‘we are not alone’ and this means that other people – whether enemy, terrorist or criminal can use laser technologies against friendly military or civilian targets. And non-friendly forces are now exploiting laser features against us, whether for warning, distracting, interfering, impairing vision, and even blinding.”

Annati related some reported examples of relatively recent malicious use of laser systems against “friendly” forces around the world.

In April 1997, Pudget Sound, Canada. The Kapitan Man, a Russian vessel dazzled a Canadian Sea King helicopter, causing retinal damage to CDF pilot and US Navy intelligence officer. In 2010, during a counter-piracy operation in the Horn of Africa, a Dutch Marine was accidently lased during a patrol, and suffered retinal damage. It is believed that this was probably by some private maritime security operators onboard a protected MV. In this case, binoculars focused the laser beam onto the victim’s retina.

In October 1998, a US UH-60 helicopter of SFOR was lased over Bosnia-Herzegovina. The pilots suffered temporary injury. And in 1999, NATO warned of possible laser attacks against aircraft flying over Kosovo. In May 2003, two U.S. AH-64 Apache attack helicopters were targeted with laser flying South of the DMZ with North Korea. 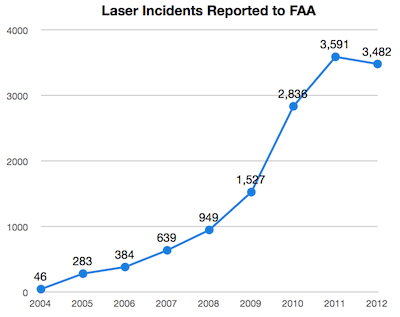 However, besides the few publicly available reports of military incidents, there has been reported a large number of U.S. aviation accidents or incidents associated with lasers.

Annati told the conference: “The number of laser-aircraft incidents in the U.S. alone during the period January through December 2012 was 3,482 – an average of 9.5 incidents each night during that year. Fortunately only a small number of these (below 1%) resulted in serious injury or permanent damage.”

U.S. airspace and areas of military conflict in the world aside, there are other theaters where laser pointers and other portable laser devices are increasing used for malicious purposes. Hotspots of civil unrest, whether protests in Europe against political or economic instability, or in North Africa and parts of the Middle East during the recent “Arab Spring” have experienced greater misuse of lasers.

Annati said, “The use of lasers by protesters is becoming more and more common in all sorts of protest and even sporting situations. Commercially available pointers are potential weapons: 1 W portable handheld lasers are freely available on the market. In this case the laser is marked Class 3B, but when tested it is found to be a class 4 – 200 times more powerful than ordinary office pointers.”

"Such lasers can cost as little as $300, delivering green or blue light. The label says do not use the laser against an aircraft but it also says this is a class 3B laser – but it’s not – it’s actually a class 4 laser. If we compare a nominal pointer like this, the commercially available 800mW or 1W lasers, with the specification of one of the current military-type dazzlers, you can see that the commercial laser is much more powerful and much more dangerous than the military-grade dazzlers." 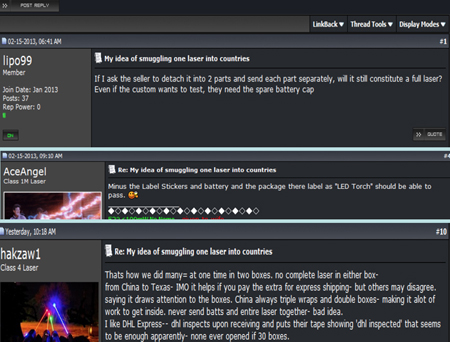 Annati also highlighted how these high power or incorrectly specified lasers can get into the hands of potentially malicious or illegal users, citing a combination of variable import and export restrictions and differing legal permissions and penalties for possession or misuse of lasers depending on the country.

He commented, “Although causing hazard and harassment to aviation, drivers and police, is a crime in most countries, laser use in public, unjustified possession during marches, protests, and football games, etc, is only scarcely regulated. Also the import, commerce and possession of lasers is regulated in some countries, totally free in others, making it difficult to control Internet-based trade.”

The seventh NLW Symposium will be held June 3-5 2013, in Ettlingen, Germany – which Annati described as “probably the world’s most important event in this specific area”.

Optics.org attended the two-day DES 2013 conference in early March 2013, and over the coming weeks will be publishing further reports based on selected conference presentations and interviews.