After three years of solid growth in Jena, the firm invests in a new coating and cleaning facility. 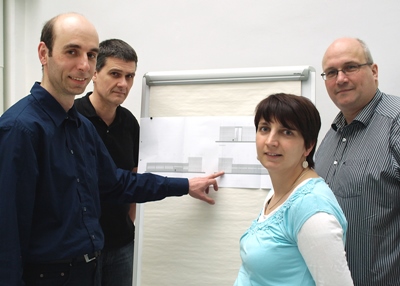 Optics Balzers, the manufacturer of custom optical components and thin-film coatings, is set to expand its presence in Jena, Germany, with a new facility.

The company, which is headquartered in Liechtenstein, says that the manufacture of components used in laser applications is expected to be a key focus for the new facility. A ground-breaking ceremony at the site, a one-hectare plot in the Jena 21 business park, is scheduled to take place this September.

The move follows a near-doubling of sales revenues at Optics Balzers Jena, which currently employs 40 people and sells into space and biophotonics applications including Raman and fluorescence spectroscopy, over the past three years. In 2012, those revenues grew beyond company expectations to reach €4.5 million.

Close cooperations
Stefan Jakobs, the managing director of Optics Balzers Jena, commented: “The last three years were no walk in the park, but turned out much better than we expected.” He attributes the result to a combination of recent development work carried out in Jena and on the strong partnership with the main Optics Balzers company in Liechtenstein.

He also cites the close cooperation with customers, universities and scientific institutions to develop new technologies as critical. One example is the filters for Raman spectroscopy that have been developed in Jena for medical applications.

Thanks to a global sales network, Optics Balzers Jena says it has increased the exported proportion its manufactured optical components to 48% in financial year 2012, with the US and France proving to be the leading recipients.

Alex Vogt, the CEO of Optics Balzers in Liechtenstein, confirmed that plans to meet the future growth in demand for components were now being put in place. He said: “We will stick to our growth course. The board of directors agreed to the construction of a new industrial building with ultra-modern coating and cleaning facilities.”

Optics Balzers set up its Jena division back in March 2010 when it acquired mso jena Mikroschichtoptik, a specialist designer of optical components based on interference coatings founded in 1998 as a spin-off from the local Fraunhofer Institute for Applied Optics.

At the time of the Balzers acquisition, the division employed 25 people. mso jena was one of the first companies to apply optical broadband monitoring for controlling coating processes, and its specialist capabilities included applying optical filters to 8-inch photodetector wafers.