German company details high-power diode bars with up to 67% wallplug efficiency at 976 nm. 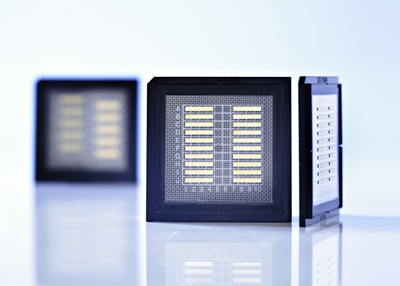 Researchers at Jenoptik’s diode laser laboratory in Berlin, Germany, have developed single-emitter, array and bar structures with a dramatic increase in wallplug efficiency compared with the firm's current commercial products.

Thanks largely to a new waveguide design that is said to be highly suited to volume production, the new emitters are up to ten percentage points more efficient than their predecessors – an efficiency hike that should lead to cheaper and more efficient fiber, disk and direct diode laser systems for materials processing.

Efficiency ramp
After detailing the new structures at the SPIE Photonics West LASE conference earlier this month, Jenoptik told optics.org that engineering samples were already becoming available, and that the breakthrough had generated substantial interest at the event.

Ralf Hülsewede, manager of research and development in the company’s lasers and material processing division, told delegates that a new epitaxial structure initially designed for 940 nm emitters had now been adapted to 915, 955 and 976 nm devices, including single emitters, bars and arrays.

The latest results show that, using active cooling, the new high-fill-factor bars can emit more than 280 W of output power at a wavelength of 940 nm, with a wallplug efficiency of 60%. The team reported even higher efficiency figures are lower powers.

Moving to longer wavelengths, a high-brightness bar comprised of 19 individual 976 nm emitters (20% fill-factor) showed a maximum efficiency of 67%, with Hülsewede again pointing out that the efficiency figure only decreased very slightly as the output power was increased – offering 66% at 80 W optical output.

In comparison, under similar operating conditions the efficiency of Jenoptik’s existing commercial 976 nm bars is around 59%.

Single emitters and arrays
While such bars are mostly suitable for disk lasers and direct-diode systems, high-power fiber lasers tend to require single emitters or arrays. Jenoptik’s 955 nm single emitters based on the new structures showed 12 W of power at 69% wallplug efficiency. Arrays of emitters with a 10% fill-factor also showed an efficiency of 69% with an output power of 55 W.

To improve the diode efficiencies, Hülsewede and colleagues say that the key is to cut both electrical and thermal resistances in the devices. That can be done by reducing the thickness of the epitaxial layers, while doping levels are also critical. Increasing cavity length to several millimeters also helps to cut serial resistance and improve thermal management.

Jenoptik stresses that even though the evolutionary design has delivered a large improvement in wallplug efficiency, the diodes have been developed very much with industrial use in mind. Laser chips were on view at Photonics West and engineering samples are said to be available already.

The company formally opened its new laser diode fab in Berlin last August, following an investment of some €10 million.