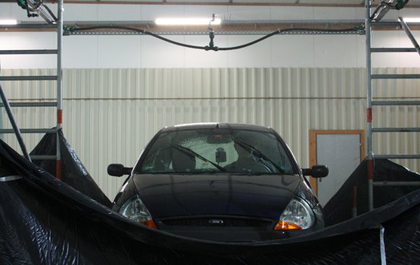 Stormy weather? A car tested under a rain simulator.

Drivers on a rainy day regulate the speed of their windshield wipers according to rain intensity: faster in heavy rain and slower in light rain. This simple observation has inspired researchers from the University of Hanover in Germany to develop RainCars, an initiative that aims to use rain-detecting optical sensors on GPS-equipped moving cars to measure rainfall across the country.

The most recent results of the project are now published in the journal Hydrology and Earth System Sciences, published by the European Geosciences Union (EGU).

Project-leader Uwe Haberlandt Rainfall can vary widely across different parts of a region such as Northern Germany. Conventional rain gauges are accurate, but are often distributed too sparsely to capture much of this variation in detail. Collecting better information about precipitation is important for flood prediction and prevention.

“If moving cars could be used to measure rainfall the network density could be improved dramatically,” explains, who says the idea for RainCars emerged during a brainstorming session between geoinformatics researchers and hydrologists. With over 40 million cars in Germany alone, and with traffic increasing worldwide, the multi-disciplinary team might be onto a winner.

Now, with a lab equipped with a rain simulator, the researchers have been able to put their idea to the test. They placed cars with different wiper systems under the rain machine, which uses a sprinkler irrigation system with adjustable nozzles to simulate light to heavy rain, to find out exactly how wiper speed relates to rainfall intensity.

In one set of experiments, an individual in the car adjusted the wiper speed manually, depending on the windscreen visibility. “The experiments have shown that the driver’s forward visibility is a good indicator for rainfall intensity,” says Ehsan Rabiei, Haberlandt’s collaborator and the paper’s lead author. But the measurements could depend on the person adjusting the wiper speed so might not be reliable. 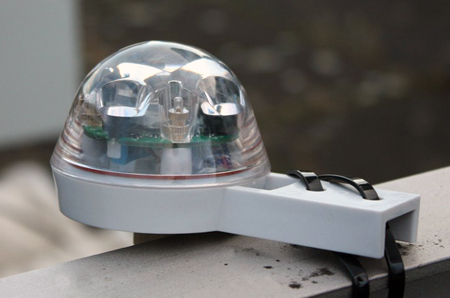 In another set of experiments, the team used the rain machine to test the optical sensors that are installed in many modern cars to automate wipers. The sensors use a system of infrared laser beams that detect when drops of rain accumulate on the surface of the device. Each sensor reading corresponds to a specific amount of water, with more frequent readings corresponding to more intense rainfall.

“The optical sensors measure the rain on the windshield in a more direct and continuous manner so, currently, they would be the better choice for rain sensors in cars,” says Haberlandt.

The team could also test the effects of car movement on the measurements by placing the sensors on a rotating device, which simulates car speed, under the rain simulator. By knowing how the readings are affected by car speed, they can correct for this effect when using moving cars to measure rainfall.

But speed is not all that can alter the rain measurements, as Rabiei explained. “Our experiments so far were carried out in an ideal and controlled environment. In nature there are external effects like wind, spray from other cars or shielding trees that can affect the readings, and rainfall characteristics are different from the rain simulator.”

”The value of using moving cars to measure rainfall is not about a higher accuracy of rainfall measurements but about a much higher number of measurement points.” In a Hydrology and Earth System Sciences study published in 2010, two of the team members showed that a high number of less accurate rain gauges gives more reliable rainfall readings than a low number of very accurate devices.

The Hanover researchers are now working on field experiments using cars to measure real rainfall in and around the city of Hanover. The research “team” includes volunteers, a taxi company and a car company involved in the field experiments. And the researchers say they would welcome more particpation by local people.”