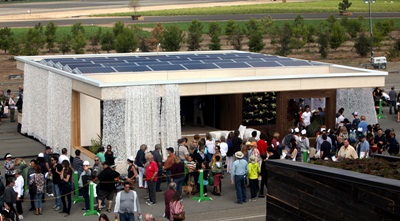 by Rich Donnelly in Irvine, California
Two teams from Europe will bring home trophies from the sixth Solar Decathlon in the US.

Organized by the US Department of Energy, the event challenges participating teams to design, build, and operate cost-effective solar-powered houses, and was first held in 2002. Teams are evaluated for affordability, consumer appeal and design excellence, and the event is a showcase for solar technology and innovative energy-efficient design.

Both European teams did well in the engineering category. The Czechs took second and the Austrians tied for third – first place went to Team Ontario, made up of students from Queen’s University, Carleton University, and Algonquin College.

The Austrian house, named LISI (Living Inspired by Sustainable Innovation), was easily recognizable because of its distinctive curtains, enclosing the north and south terraces while still allowing sunlight in. Austrian team engineer Sabrina Novalin said that the 8.6 kW of photovoltaic arrays on the roof of Team Austria’s house were almost invisible from ground level.

“They’re mounted on pre-molded substructures with a 10-degree inclination,” Novalin said. “It’s nice because the technical aspects of the house are hidden and incorporated in a way that they leave as much room for architecture and design as possible.”

She added that for most teams, combining groups of architects and engineers leads to some conflicting priorities. “[The challenge is] to apply all the things you learned in school, and put them into the big picture,” said Novalin. “To approach this entire project in this holistic way, it gives you a really good overview afterwards. I think we did a good job of incorporating a lot of really cool technologies in our house.”

Helpful weather
Competing teams designed and built houses of under 1000 square feet over a two-year period. The structures were then reassembled at Orange County Great Park, on a runway of the former Marine Corps Air Station El Toro in Irvine, California, where thousands of visitors toured the homes.

Besides architectural and technical categories, each project was judged in areas including market appeal, affordability and communications.

The 2013 event, held outside of Washington, DC for the first time, seemed to benefit from the warm, sunny weather in southern California. For the first time, all 19 of the competitors' houses produced more energy than they consumed.

Competition between the leading teams was also closer than in past events – with just seven points out of a possible 1000 separating the top three.

Engineering juror Kent Peterson pointed out numerous teams’ innovations developed for the event, some of which will lead to patent applications. They included gesture-technology switches, dehumidifying systems, and even 3D printing of special fittings for water heaters. Peterson also credited teams that had developed their systems far enough in advance to test and tweak their designs in the laboratory prior to the event.

• The next Solar Decathlon in the US is in 2015, but the competition returns to Europe next year, opening June 27 in Versailles, France.