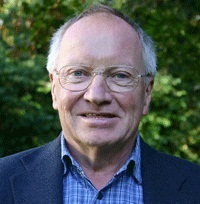 Craig Mackay, a professor of image science at the University of Cambridge's Institute of Astronomy, has won this year’s Norman Edmund Inspiration Award.

Mackay is heading up a team of researchers who are developing improved adaptive optics technology for astronomy applications. They win $5000 worth of Edmund products, and were selected for the prize ahead of teams led by Simon Alford at the University of Illinois at Chicago and YongKeun Park at the Korean Advanced Institute for Science and Technology (KAIST).

Known as “adaptive optics lucky imaging” (AOLI), the Cambridge team’s approach is an extension of the adaptive optics already used in ground telescopes. It promises to deliver near-perfect images, by virtually eliminating the effect of turbulence in the Earth’s atmosphere, and can use much fainter reference stars than is typically possible with adaptive optics.

Announcing the award, Edmund said that Mackay’s team had already produced images with an angular resolution about three times better than that of the Hubble Space Telescope.

And in a journal paper published by the Royal Astronomical Society last year, Mackay showed that it would be possible to apply the AOLI technique to very large telescopes, even with extremely faint guide stars.

On-sky system
Mackay and his colleagues are currently building and testing a new instrument designed to deliver much higher angular resolution in the visible spectrum for 5-10 meter class telescopes. With it, the sharpest images can be made even sharper thanks to a new lower-order curvature wavefront sensor and a photon-counting EMCCD sensor.

The system uses an optical assembly capable of capturing of two near-pupil images simultaneously. With that, the wavefront can be reconstructed, driving a deformable mirror that corrects the initially blurred image.

Within the past month, the AOLI system was shipped from the Cambridge laboratory to undergo tests at the William Herschel Telescope on the Canary Island of La Palma. According to a report posted by Mackay on the Institute of Astronomy web site, the system went “on sky” during the nights of September 24 and 25, but was hampered by very poor viewing conditions.

Nevertheless, that initial commissioning run showed that only minor alterations would be needed for the subsequent stages of the project.

The team’s long-term goal is to adapt the AOLI instrument for the largest telescope in the world - the 10.4 meter Gran Telescopio Canarias (GTC), also located on La Palma – while the next step should see an updated and refined version of AOLI shipped to Tenerife for a further commissioning run in 2014.

"Professor Mackay's project is a significant evolution in the field of adaptive optics and will help to lower the costs of high resolution imagery considerably by not having to launch equipment into space," commented Marisa Edmund, now VP of marketing and communications at the firm that her grandfather Norman started up at his home back in the 1940s.

• The Norman Edmund Inspiration Award honors the contributions made by Norman Edmund to advance the science of optics. The recipient of the award is chosen from the first-, second-, and third-place prize recipients in the Americas, Europe, and Asia, who best embodies the legacy of Mr. Edmund.

Professor Mackay was the first-place recipient of €7000 in Edmund Optics products in the company’s 2013 Higher Education Global Grant Program.