Ultratech finishes 2012 on a high

Lithography and laser annealing equipment firm expects to carry on bucking the semiconductor market trend with continued growth in 2013. 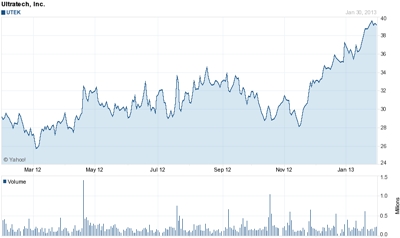 Ultratech has completed its fiscal year 2012 on a high, with record revenues, bookings and net income in the closing quarter of the year and a positive outlook for 2013.

Both figures represented strong increases on the same period in the prior year – even though the wider market for semiconductor capital equipment has slumped into a trough since then. At $234.8 million, annual sales in 2012 were up more than 10% on the 2011 figure.

CEO Arthur Zafiropoulo said that the firm’s systems had enjoyed strong acceptance from customers despite the weak economic environment, and that he believed Ultratech would continue to buck wider trends through 2013.

He described the closing quarter of the year as “outstanding”, and highlighted a tool shipment to a large Asian manufacturer of memory chips that is scheduled for delivery this quarter as a key design win.

One of Ultratech’s laser spike annealing tools is also due to be shipped to a customer towards the end of 2013, where it will be used for initial work on 450 mm diameter semiconductor wafers. Moving to that wafer size represents the next big step up for chip makers, although the technology will not be used in volume production until around 2016.

With the HB-LED equipment market also going through an extended slump, Ultratech has instigated a three-tiered strategy for selling its tools to LED manufacturers, including new options to buy “ as new” tools and a rental program.

The company, which has sold more than 300 of its relatively low-cost ALD tools (they tend to cost between $100,000 and $1 million, the CEO said), mostly to university groups and central laboratories, ran into financial problems in recent times – despite racing from scratch to an annual sales turnover of $18 million a couple of years back.

Calling the acquisition a “very big opportunity” for Ultratech, Zafiropoulo stressed that the ALD tools, which are extremely precise but, because of their layer-by-layer deposition, slow, would not be aimed at the mainstream semiconductor sector.

The CEO is hoping that new applications can be developed by selling the tools to leading researchers, and is specifically targeting the medical sector. However, he did highlight one existing commercial application in the optics field, where the tools are used by Texas Instruments to deposit ultra-thin coatings onto the mirrors used inside the tech giant’s digital light processor (DLP) products – where they reduce friction in the moving parts.

Looking forward to 2013, Ultratech’s management team is anticipating revenue growth in the 5-10% region. If correct, that would again buck the wider trend, with analysts at both VLSI Research and Gartner both predicting another contraction of the semiconductor equipment market this year.

Following an investor call, Ultratech’s stock traded around 7% higher, valuing the company with a market capitalization in excess of $1 billion. At around $41 per share, the stock is now valued more than 40% higher than a year ago.