The rtx1 camera is the first adaptive optics platform approved for clinical use. 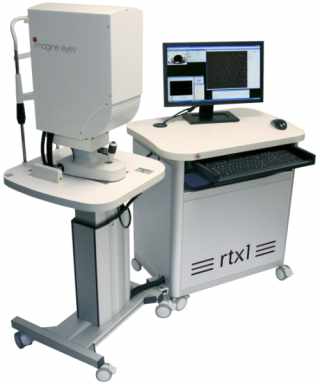 From bench to bedside

Imagine Eyes, the developer of diagnostic ophthalmology devices based in Orsay, France, has announced that its rtx1 retinal camera is now CE-mark approved for clinical use in the European Union.

The rtx1 is designed to image the retina at the cellular scale, enabling clinicians to observe the microvascular structures that are frequently affected by vision-degrading diseases.

It does so through the incorporation of an adaptive optics (AO) system, specifically the company's AOKit-eye platform. The rtx1 is said by the company to represent the first such AO device approved for clinical use.

"Imagine Eyes has developed patented and proprietary retinal imaging technologies, based on adaptive optics, that are dedicated to ophthalmic applications," Mark Zacharria of Imagine Eyes commented to Optics.org. "This has involved overcoming several major hurdles that were, until now, key barriers to market entry. Doing so while complying with all of the norms for medical devices represented a challenge."

Those challenges included the need to cope with a patient's natural eye movements and to improve the instrument's operating range, since existing deformable mirror technologies were unable to compensate for the wide array of optical distortions found in human eyes. "Imagine Eyes has the exclusive exploitation rights to market a patented electromagnetic mirror technology that overcomes this limitation," said Zacharria.

Other hurdles were the need to miniaturize the system as much as possible, and automate the examination process without significant user intervention.

During an examination the camera images retinal areas in a field of 4 degrees x 4 degrees, capturing enough of the vascular pattern to allow accurate registration of the adaptive optics image with other diagnostic techniques, such as fundus imaging or OCT.

The field is illuminated by a 850 nm LED, based on a 32 x 32 microlens optoelectronic sensor and a large-stroke 52-actuator electromagnetic deformable mirror. While the AO system is compensating for the eye’s optical defects, the instrument is focused at the retina's cone photoreceptor layer, and a series of 40 raw images acquired by exposing the retina to 9 ms near-infrared flashes, fast enough to avoid the blurring of the image due to natural eye drift. An image with enhanced contrast is computed by registering and averaging raw images using classical algorithms. 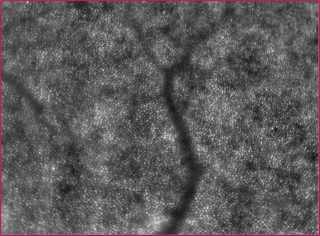 The Imagine Eyes camera employs flood illumination, similar to that used by a typical fundus camera, rather than the confocal techniques under development for retinal imaging in other camera platforms.

"Our approach is not confocal," confirmed Zacharria. "It's not a question of better or worse; more of different approaches for different uses. The systems built by some academic labs produce beautiful images and a good number of them use our AO technology, but they are not designed for clinical use. Our goal was to deliver a device that can be used by any qualified operator familiar with current clinical imaging devices."

Zacharria noted that the Imagine Eyes rtx1 device is about the same size as other ophthalmic imaging devices, whereas academic systems can easily require one or more optical benches.

As well as CE-mark approval, the rtx1 has received the Shonin mark in Japan, with FDA 510(k) approval for the US to follow "hopefully by the end of Q2 2013," said Zacharria. "Other regulatory approvals will also follow and be driven by market demand. We have seen a lot of interest from distributors in emerging markets, notably Asia."