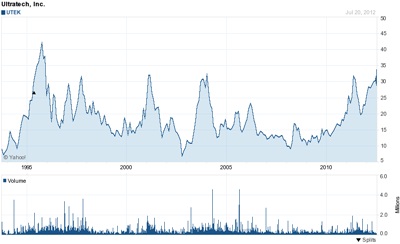 Shares in the lithography and laser processing equipment firm Ultratech have reached their highest level in nearly 15 years, after the San Jose company issued strong bookings and guidance for the rest of 2012.

CEO Art Zafiropoulo said that the firm’s book-to-bill ratio remained greater than unity in the second quarter of the year, despite a 19% sequential increase in sales – indicating that bookings are still gathering momentum.

He is expecting demand to return from the high-brightness LED market, where Ultratech’s systems are used in lithography applications, in the second half of 2012 as manufacturers get back into making capital equipment purchases.

The LED space has seen an extended dip in equipment purchases over the past several quarters, as the industry consolidates and excess capacity from the last strong period of demand is gradually eaten up.

The company also recently sold its 50th laser spike annealing system, to a semiconductor foundry operation in Asia. The company also noted that it has now shipped more than 15 of its flagship LSA101 systems, which can achieve a productivity throughput of up to 60 wafers per hour.

The company has recently been busy hiring engineers at its San Jose facility to meet the growing demand for laser processing systems, with the additional manpower expected to start making a real difference to capacity by the start of next year as demand from silicon semiconductor applications kicks in.

The extra personnel are also expected to reduce the time-to-market for several new products under development at Ultratech.

CEO Zafiropoulo stressed that the company was yet to see any push-out of orders from foundry customers who manufacture devices used in smart phone and tablet PC applications, despite what is perceived as a worsening macroeconomic picture around the world.

As a result of that and the return of demand from HB-LED manufacturers, Ultratech has increased its financial expectations for the remainder of 2012, saying that it expects revenues to end up 5-10% higher than the full-year 2011 figure of $212.3 million.

Full-year earnings should show an even greater increase, up 10-15% on the $1.51 earnings-per-share figure that it posted for fiscal 2011.

The company has also spent $8 million on acquiring IBM-owned patents covering back-end semiconductor manufacturing and advanced packaging, and expects to see the benefit of those as processes such as 3D packaging gain traction in the coming years.

Investors reacted positively to the strong results and outlook, pushing Ultratech’s stock price to nearly $34 – a level that it last reached in September 1997. At that share price, the company’s market capitalization is close to $890 million, which in combination with cash and equivalents of nearly $250 million on the Ultratech balance sheet puts it in a very strong position for future expansion.

One application area where that looks likely to happen is in semiconductor metrology tools, where the market is currently dominated by the looming presence of industry giant KLA-Tencor.

However, Zafiropoulo thinks that Ultratech can begin to take market share from its rivals and is targeting a share of 30% over the next few years.