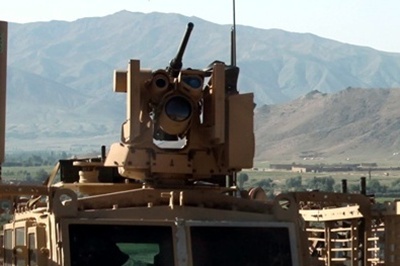 Electro Optic Systems (EOS), the Australian company that develops and makes remote weapons systems based on photonics technologies, is to scale up its manufacturing capacity via a deal with the Korean industrial giant Hyundai.

The agreement, similar to an existing arrangement in the US with Northrop Grumman, means that the relatively small Canberra-based firm – EOS employs only 120 staff – will be able to quickly ramp up production at a much lower capital risk, and deal with unpredictable changes in government spending on military hardware as it targets global markets.

The EOS chief executive Ben Greene said in a statement announcing the Hyundai deal: “[Our partnership] will move quickly to establish remote weapons system (RWS) production in an existing Hyundai-WIA plant in Korea. A key element will be pooling EOS and Hyundai-WIA technologies in product development, quality improvement and production engineering.”

“EOS is now a major step closer to a business model adapted to volatile global demand during a sustained period of unpredictable government budgets,” Greene added.

EOS has also suffered from the rapid appreciation of the Australian dollar currency in recent years, and as a result has reduced the scale of its domestic production operation in Queanbeyan. But the company believes that the new Hyundai agreement will improve its overall competitiveness, and predicts an increase in sales growth that will offset the effect of transferring some manufacturing activity to off-shore locations.

Hyundai is perhaps best-known for its automobile business, but the company has a sizeable presence in many other markets, ranging from photovoltaics to shipbuilding. One division of its WIA subsidiary specializes in defense technologies.

CROWS opportunity in US
The Hyundai-WIA agreement is similar to the existing deal between EOS and Northrop Grumman in the US, under which the two companies jointly develop, make and support RWS – although only for the US and certain restricted export markets.

Under this agreement, EOS and Northrop are working together to compete for a major US Army contract for the next generation of common remotely operated weapons systems (CROWS). That contract is set to be awarded in October this year.

The CROWS technology allows weapons to be operated remotely, from inside a Humvee or other armoured vehicle, so that soldiers can stay inside the vehicle and are at a lower risk of injury from attacks. More than 1000 CROWS systems are already in use by the US military, relying on key optical technologies such as daytime cameras, thermal imaging for night vision, sensors and laser rangefinders.

CROWS has been in use since 2004, and was first deployed during the conflict in Iraq. More recent developments include the use of a green warning laser to temporarily disorient adversaries and warn civilians of a potential attack.

Last year, EOS relocated its US operation from Tucson, Arizona to Huntsville, Alabama – directly alongside partner Northrop Grumman – to focus on the requirements for the forthcoming CROWS program.

With agreements in both Asia and the US now, EOS says that it will be able to deal with any rapid surges of capacity, reduce the overall cost of the RWS technology and gain access to markets that would otherwise prove very difficult to penetrate.

EOS also targets the space sector, for example with a laser system designed to track small pieces of space debris. As reported by optics.org in 2010, it is working on a project to track pieces of space junk measuring less than 10 cm in size and more than 1000 km away using a system based at the Mount Stromlo observatory near Canberra.

The company is also developing a laser ablation technique designed to push pieces of space debris into different orbits, where they will pose less of a threat to critical equipment such as communications satellites.