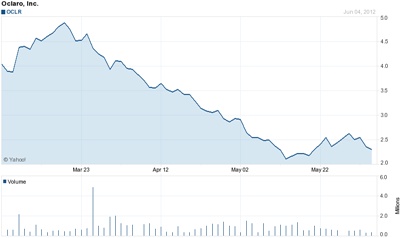 Opnext's board of directors has rejected an unsolicited takeover bid from a private company.

The manufacturer of optical components and modules, primarily but not solely targeted for use in communications, said that it received a bid valuing the company at $1.40 per share (approximately $126 million) from an unspecified “technology-focused” private equity firm on May 23.

That offer represented a rival to the company’s pending merger with fellow component maker Oclaro, which the two companies revealed in late March. Under the terms of the stock-based Oclaro deal, expected to be completed within weeks, Opnext stockholders are due to receive 0.42 Oclaro shares for each Opnext share that they own.

Stock drop cuts valuation
Back in March, that valued Opnext at close to $177 million, but since then the value of many stocks – including Oclaro’s - has dropped significantly on renewed economic concerns. In addition, the communications industry analyst firms Infonetics Research and Ovum said last month that the opening quarter of 2012 was a particularly bad one for the sector.

Oclaro’s stock price has slumped by nearly 50% from $4.66 on March 26, the day that the Opnext merger was announced, to only $2.55 on May 23, when the private equity bid for Opnext was made – indicating that Opnext would effectively be valued at closer to $90 million under the terms of the merger.

“After careful consideration and consultation with its financial and legal advisors and with Opnext management, Opnext's board of directors determined that the offer was not financially more favorable to Opnext's stockholders [than the Oclaro deal],” said Opnext in a statement, also pointing out that the private equity proposal would still be subject to due diligence.

Oclaro’s proposal had represented a premium of 74% to Opnext’s market capitalization back in March, and the latter’s stock price immediately rose by approximately that amount. But since then Opnext’s stock has fallen back below levels seen before the deal was announced, and at the close of trading on June 4 the company’s market value stood at just under $88 million.

Assuming that the private equity company does not increase its bid for Opnext, or that shareholders disagree with the board’s rejection, then the merger with Oclaro is expected to create the world’s second-largest provider of optical components and modules, ranking behind only Finisar.

Opnext CEO Harry Bosco, speaking when the Oclaro merger deal was announced, told investors: “This combination will create a company with a complementary product line that nobody else in the industry has.”