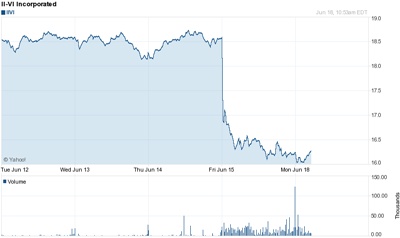 More than $150 million was wiped off of the value of the US-based optics company II-VI, after its management team again lowered its sales and profit forecast for the current financial year.

The manufacturer of optical components used in CO2 lasers and a multitude of other photonics applications now expects to post sales of between $135 million and $137 million for the closing period of its fiscal year 2012.

The change means that II-VI is likely to post annual sales of around $534 million - slightly less than it had previously indicated and below analyst expectations. Mark Douglass of Longbow Research had forecast a figure of $539 million, for example.

The fall in stock value is likely reflective of a more significant gap in expectations of profitability. II-VI now estimates that it will post earnings of around $0.95 per share for the full fiscal year 2012 – compared with an analyst consensus of $1.09.

II-VI also disappointed with its first indication of sales and profits for fiscal 2013, which begins on July 1. Although sales are predicted by the company to rise nearly 10% to between $582 million and $588 million, the forecast earnings range of $1.14-1.21 for fiscal 2013 is well below both a consensus of $1.45 and Longbow’s $1.40 estimate.

Record backlog
Frank Kramer, the II-VI CEO, put a positive spin on the guidance update, saying in a statement: “Our forecast for growth starts with an expected record backlog at June 30, 2012. More specifically, we anticipate growth will be propelled by our Infrared Optics and Photop businesses. We also expect results to increase sequentially quarter by quarter as the year progresses.”

II-VI will also benefit from a return to normal operations of its recently acquired Aegis division, Kramer added: “Since the negative impact of the Thailand flooding experienced in fiscal year 2012 will be behind us, we look forward to growth from our Aegis business during its second year of II-VI ownership.”

One of the reasons for II-VI’s lower profitability in the near term is the low price of tellurium, which has slumped due to decreased demand from the solar photovoltaics market, where the metal is used in thin-film solar panels.

The company’s financial guidance for fiscal year 2013 assumes that the price of tellurium will remain at current low levels, and capital spending of between $35 million and $40 million. It also excludes any potential insurance pay-out relating to the Thai flooding.

II-VI is scheduled to release its financial results for fiscal year 2012 before the market opens on August 2.