The German organization for applied research finalizes a strategic collaboration with Scotland’s University of Strathclyde. 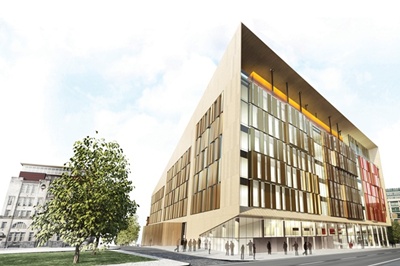 As first reported by optics.org last November, Glasgow has been chosen as the location for the first UK outpost of the Fraunhofer Gesellschaft, following the official establishment of the Fraunhofer Centre for Applied Photonics (F-CAP) in the city.

Through a strategic collaboration with the University of Strathclyde, and connections with other Scottish universities, the center is intended to become a hub for industry-driven laser research and technology aimed at exploiting local photonics expertise for commercial applications in a wide range of market sectors.

University of Strathclyde principal Jim McDonald said in a statement welcoming the development: “It is fitting that the UK’s first Fraunhofer Centre is dedicated to lasers, a thriving industry Scotland has excelled in for decades.”

“The plans have already been endorsed by our partners in industry,” he added. “By working side-by-side with colleagues in business, industry and government, we are finding solutions to global challenges, enhancing industry innovation and competitiveness and supporting the economy.”

Tim Holt, currently the chief executive of Strathclyde’s Institute of Photonics and formerly UK sales manager at the industrial laser firm Rofin-Sinar, will head up the new Fraunhofer UK operation as its executive director, the university said.

The appointment of a director for F-CAP is in progress, and optics.org understands that an announcement will be made shortly.

The unit will eventually be based at Strathclyde’s £89 million Technology and Innovation Centre, but that giant facility is currently under construction and not scheduled for completion until 2014. In the meantime, the new Fraunhofer operation will be housed at “interim accommodation” on the Strathclyde campus, starting later this year.

£9 million funding
The new Fraunhofer photonics technology hub is set to receive around £9 million in central funding over the next five years. Around two-thirds of that total is being provided by Scottish partners, with one-third from Fraunhofer. The total does not include any potential contributions from business for sponsored research, which typically accounts for around one-third of Fraunhofer funding in Germany.

At the outset, F-CAP will begin operating with around ten full-time staff, but that number should swell to around 80 employees and postgraduate students after five years.

Ownership of intellectual property (IP) developed at the facility will vary on a case-by-case basis, dependent on which partner has provided funding for the specific research and development effort in question.

As Europe’s largest applied research organization, with more than 80 units in Germany, the Fraunhofer model is held in high esteem around the world. It has already established several facilities in the US – most recently via a collaboration with the Massachusetts Institute of Technology – and is set to expand further in Europe, Asia and South America. 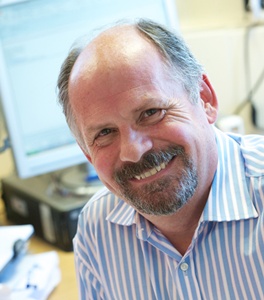 Industry links
Scotland’s education secretary Michael Russell highlighted the importance of the role that F-CAP could play in strengthening the connections between academia and the wider world, saying: “Building on the links between education and industry is a win-win situation that will benefit our economy.”

“Scottish universities are known around the world for their excellence, and Glasgow has a global reputation for advanced research and technology,” he added. “It’s great news that this success has helped to attract Fraunhofer to Scotland.”

The development may also go some way to appeasing critics of the UK government’s decision not to select photonics for one of its “Catapult Centres”, which are also intended to bridge the gap between technology research and commercial success.

Those newly established centers are based loosely on the Fraunhofer model, although the proposal for a Fraunhofer dedicated to applied photonics in Scotland actually pre-dates the Catapult actions.

Ulrich Buller, a senior VP within the Fraunhofer Gesellschaft, said of the Strathclyde collaboration: “The university has an excellent reputation for industrial engagement and specifically for photonics research and commercialization. Consequently, Fraunhofer has been eager, for some time (emphasis added), to create a research centre in Glasgow.”

Partner institutions
F-CAP will also partner with the Fraunhofer Institute for Solid-State Applied Physics (IAF) in Freiburg, where innovations in the field of photonics have included high-power disk lasers, infrared detectors and gallium nitride semiconductor chips.

Fraunhofer IAF director Oliver Ambacher said of the new links being established: “Photonics activity is particularly strong in the UK, and most especially in Scotland, and I look forward to many years of collaboration between Fraunhofer and the UK companies which will be beneficial to the economies of Scotland, the UK and Europe as a whole.”

Although F-CAP will be headquartered at Strathclyde, the minutes of a recent committee meeting at the Scottish Funding Council (SFC) - one of the key funding partners behind the project - highlight a desire for assurances that other Scottish institutions would not be sidelined by the development:

“Assurance should be sought that this is a pan-Scottish initiative and that this is reflected in governance and operating arrangements,” noted a meeting of SFC's investment committee on February 10, 2012.

“The award [should] be made to Strathclyde University on the condition that all other Scottish institutions with an interest in advanced photonics, including Heriot-Watt University, St Andrews University and the University of Glasgow, are offered full integration into the Fraunhofer-IoP program.”