Projects in materials processing and terahertz imaging are among new contracts for the French optics technology center. 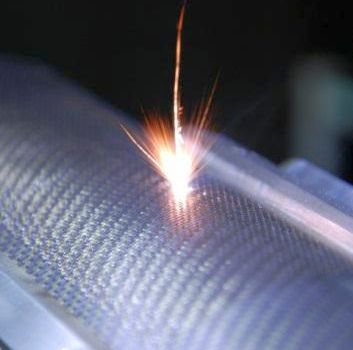 Alphanov, the lasers and optics technology center based in Talence, France, has received research contracts for four industrial projects.

The contracts come six months after the center announced a new organizational structure intended to focus more closely on specific areas of applied optics technology, along with a move to expanded premises within the City of Photonics, near Bordeaux.

The four projects announced are:

•  Perceval, which aims to reduce the environmental impact of single-aisle aircraft propulsion engines through a reduction in weight and an improvement in the aerodynamic profile of the engine's blower module. The result should be reductions in energy consumption and CO2 emissions, as well as less operating noise.

"The blower module consists of blades and vanes, located in front of the compressor in a turbo-fan engine and driven by the turbine" commented John Lopez of Alphanov. "It directs ambient air backwards, where the mass of air is partly absorbed by the compressor, and the remainder forms a cylindrical flow of cold air around the engine. The relationship between the amount of air processed by the turbine and the air blown by the blower is the dilution ratio of the engine."

Perceval aims to validate the structural integrity of the composite structures used in the fan modules; Lopez indicated that these materials included carbon-fibre-reinforced composite materials, but that specifics were confidential. Alphanov will develop laser-based pre-processing techniques for these composite materials, identifying those treatments able to offer the best compromise between productivity, selectivity and low damage of the substrate.

•  TeraVision involves the design and prototyping of an all-optical terahertz vision system. In particular, Alphanov will develop and industrialize thermo-electric converters suitable for use in low-cost, compact terahertz imaging applications.

•  The Lnp Key project will develop a laser suitable for reading the light scattered by nanoparticles used to mark and identify timber. Systems to ensure traceability of timber are essential, and marking the wood with a suitable code in the form of nanoparticles should provide a marker that can be both waterproof and resistant to environmental effects, but still able to be read by the Alphanov laser. The goal is for the final product to be available during 2014; Alphanov believes that it could then be employed in 200 saw mills.

•  Development of an optical and electrical signal analyzer with very high bandwidth will be the goal of the Orto project, which itself follows directly on from Alphanov's earlier Mulo research project that ran from 2006 until 2009. The earlier project developed and patented a new type of oscilloscope with very high bandwidth, and Orto will now seek to transfer this technology into a commercial device, allowing measurements of optical signals at any wavelength and bandwidths of 60 GHz, or of electrical signals with a bandwidth of 90 GHz. Applications in telecoms, metrology, and in wider R&D work should follow.

Alphanov, part of the Route Des Lasers competitiveness cluster based around Aquitaine's optics and lasers industry, announced a reorganization in September 2011 that would see it focus its research efforts on three sectors: laser micro-machining; the development of laser sources and components; and the design and production of optical systems. It has since added terahertz applications and biophotonics solutions to its declared areas of interest.