But major provider of infrared optics is boosted by growing demand, plus new applications in EUV lithography and green laser diodes. 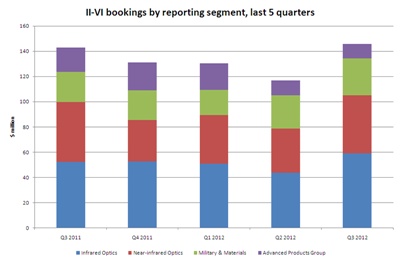 II-VI, the leading provider of replacement optics for CO2 lasers, has reported a strong increase in orders in its latest financial quarter, although profits in the same period were hit by a sharp fall in the price of tellurium.

The Pittsburgh-headquartered company sells a wide range of optical components and related materials and devices, and total orders jumped 25% sequentially, reaching a record level of $145.8 million in the quarter.

CEO Francis Kramer highlighted that orders within the company’s “infrared optics” reporting segment were up 35% sequentially, while its Photop Technologies brand also put in a particularly strong showing, with a 60% increase.

Overall revenues also rebounded strongly in the quarter, up 5% sequentially at $133.5 million. Thanks to strong utilization of industrial lasers, sales from the company’s infrared optics segment jumped 9% - with Kramer saying that he saw clear signs of strength in US manufacturing.

Extreme UV emerging
Bookings from European companies were also up very strongly, partly thanks to a new and potentially very lucrative application for CO2 lasers – extreme UV (EUV) lithography. Leading lithography stepper company ASML, based in The Netherlands, is starting to assemble EUV tools for volume chip production, and those tools look very likely to be using EUV light sources based on a laser-produced plasma.

The plasma is generated by firing CO2 lasers at a stream of tin droplets, and such is the extremely high-power of the laser required – Kramer suggests upwards of 40 kW – that conventional zinc selenide optics are unable to hold up under the intensity.

As a result, new diamond windows are required, and having worked on this technology for the past six years or so, II-VI is now expecting a significant market to develop. It isn’t the only company able to provide the free-standing diamond windows, but it is the only one to have developed a thin-film coating that is crucial to the application – and sells this to its two rivals.

Kramer added that II-VI has landed two customers in another emerging sector – this time green laser diodes. The vagaries of II-VI’s reporting segments mean that this application is included – along with telecom-related products - in the company’s “near-infrared optics” sector, which posted a 32% increase in bookings.

The CEO also says that in fiber lasers, II-VI company AOFR - part of the Aegis division - has just had a beam combiner component for a 3 kW fiber laser system qualified by a customer, with more design wins expected elsewhere as multi-kilowatt fiber lasers continue to proliferate.

Tellurium hit
Despite the largely positive picture, II-VI did see its earnings hit by a $3.6 million inventory write-down in the quarter, thanks to a sharp slump in the price of tellurium. That was attributed to slack demand from the photovoltaics industry, where tellurium is used in thin-film solar panels made by key player First Solar.

Such is the volatility of that sector at the moment – First Solar was the world’s leading manufacturer of photovoltaic modules last year, but last week announced plans to shut down two facilities in Germany - that tellurium is subject to very sharp price swings. Prices have slumped from $220 per kilogram in January to just $165, and could be headed lower, given First Solar’s woes.

Longbow Research analyst Mark Douglass says that while II-VI remains exposed to further falls in the price of the metal, any incremental effects “should be minor”. Douglass rates II-VI as an attractive investment right now, having placed a target share price of $27 on a stock that is currently trading at around $21. 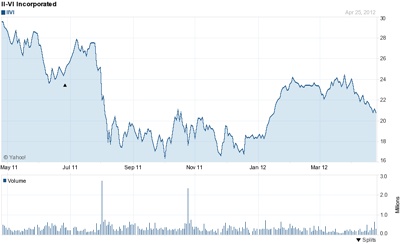 “We view the risk/reward for II-VI as attractive, with much of the down-side risk, particularly in telecom and military [markets], priced in,” he wrote in a research note following the latest quarterly announcement. “Orders appear to have turned the corner.”

Douglass adds that the company should also be looking to make strategic acquisitions on the basis of its strong balance sheet. It shows that II-VI holds close to $120 million in cash, while the company also paid down $7 million of long-term debt in the latest quarter.

II-VI now expects to post sales of between $537 million and $540 million for the fiscal year ending June 30. That is significantly lower than initial estimates upwards of $600 million made nearly a year ago, but would still represent an increase of around 7% on a year-over-year basis.