SPECTOR-HT deposition system said to deliver up to four-fold hike in throughput for high-precision optical coatings. 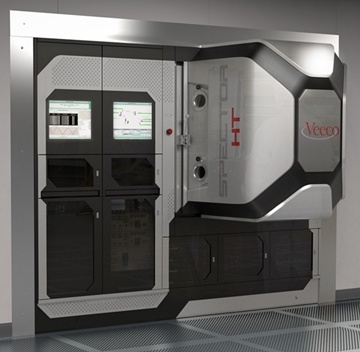 The “SPECTOR-HT” system offers much higher throughput than its predecessors, with Veeco saying that it is the industry’s first fully automated tool to achieve “ion-beam quality films at physical vapor deposition (PVD) rates”.

The upgrade to earlier SPECTOR systems sounds impressive: Veeco claims up to a 400% increase in throughput and 300% increase in target utilization. That translates to a deposition rate of 4-7  Å (depending on the material being deposited), while the radial uniformity of deposited material has also been improved, from ± 1% to <± 0.5%.

The upgrade comes at a modest price increase compared with the older systems, and stands to benefit those customers who are volume component manufacturers. Typical component applications include any that require a precision thin-film coating, including beam splitters, ultra-low-loss mirrors, chirped laser mirrors and bandpass filters.

Delayed launch
Originally slated for release at the Photonics West show earlier this year, Veeco instead chose to launch SPECTOR-HT at this week’s Photonics Europe event after delays due to engineering issues.

Over the past 14 years or so, the company has installed more than 200 ion-beam systems at customer sites around the world, with most optical component makers or coatings houses using two machines – although Veeco’s largest customer has eight of the tools at a single site.

Veeco told optics.org that it did not expect many of those existing SPECTOR tools to be replaced, partly because the older units are so reliable, and that most purchasers of the SPECTOR-HT would be new customers, or existing customers with new manufacturing facilities. The first of the new systems is due to ship to Veeco’s lead customer next month.

The new tool also features on-board optical monitoring for quality control to improve yields, and is available in two formats: a four-planet fixture capable of a 3000 cm2 coating area, and a two-planet fixture offering 2500 cm2. Radial uniformity is better with the four-planet version, at less than ± 0.25% across the 310 mm-diameter planet.